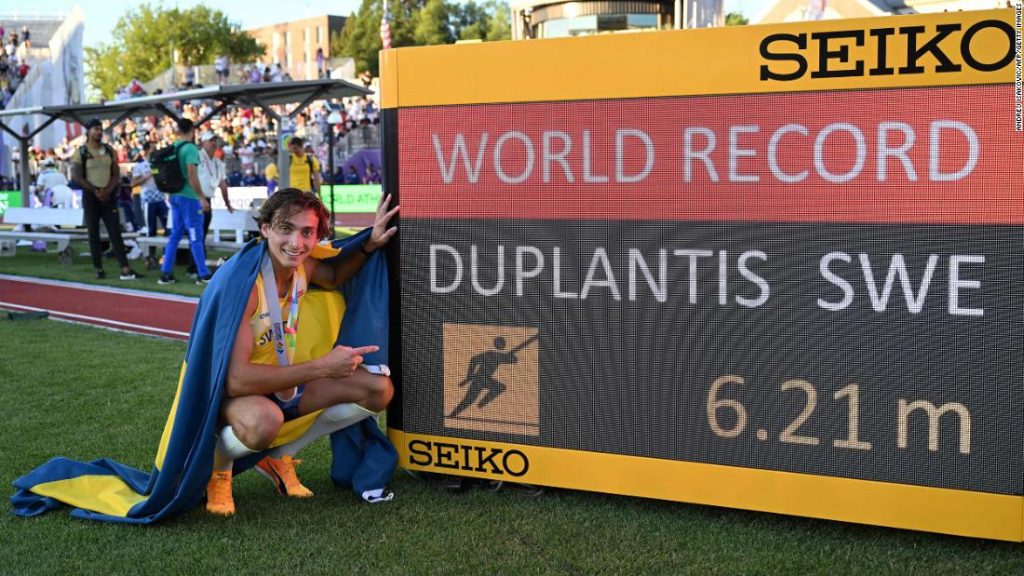 The Swede, in the final event of what’s been an enthralling 10 days in Eugene, Oregon, made it over 6.21 meters, one centimeter higher than his previous world record which he set in March at the World Indoor Championships.

Duplantis had already secured the world title with his first time jump over 6 meters after his rivals failed to make it over 5.94m.

But, in pushing himself, the 22-year-old was able to soar over his own previous record at the second attempt — the fifth time he’s broken the world record.

“It’s great; I cannot complain,” Duplantis said. “Actually, I did not think about the record that much today … I really wanted to win the gold so badly. It was the medal I was missing.

“So when I was on this height, it was like everything came together and it happened from there.”

Duplantis wasn’t the only one to break a world record on Sunday. Nigerian Tobi Amusan won gold in the women’s 100 meters hurdles after setting a new world record in the semifinals.

And she thought she’d set an even quicker record in the final, finishing with a time of 12.06 to win gold, but strong wind speeds meant the time was eventually ruled out.

The 2022 World Championships was a landmark event for the US as it was the first one held on American soil.

And the home team made that count.

Team USA finished with 33 total medals from the 10 days, the most by one country in the competition’s history — and more than three times as many as any other country at the event.

The team ended with 13 golds, nine silvers and 11 bronze medals.

It came after a strong final day for host, with three gold-medal winning performances.

Athing Mu finished first in the women’s 800 meters, while golds followed later in both the men’s and women’s 4 x 400-meter relay.