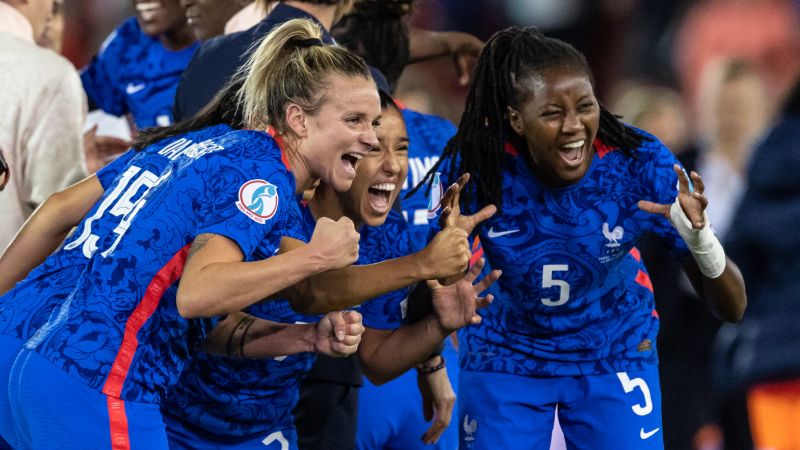 France reached their first ever Women’s Euro semifinal after a 1-0 extra time win over the reigning champions the Netherlands in Rotherham, England on Saturday.

Van Domselaar spearheaded a stubborn display from the Dutch who, defending the title they won on home soil five years ago, were outshot 33 to nine by a dominant French side.

Having only received her second international cap in the opening match of the tournament when starting goalkeeper Sari van Veenendaal was injured just 30 minutes in, the 22-year-old made ten saves in a virtuoso performance between the sticks.

Hailing the performance as “world class,” Dutch coach Mark Parsons believed it was the best goalkeeping performance he had seen since Germany’s Nadine Angerer saved two penalties to help her team to victory in the 2013 final.

“Goalkeeper of the tournament, there’s no one even close to her,” Parsons told reporters.

And on the rare occasion Van Domselaar was beaten, Dutch defenders threw their bodies on the line. Stefanie van der Gragt provided the pick of the blocks, turning away Melvine Malard’s close-range strike with her knees mere inches from goal.

Yet the resistance was finally broken in the first half of extra time when Kadidiatou Diani felled Dominique Janssen in the box. Play was initially waved on by referee Ivana Martincic, but a penalty was given after a check by the video assistant referee.

Van Domselaar got a hand to Perisset’s spot-kick, but could not keep out the well-struck effort from the defender, who signed for Chelsea in June.

The French closed out their lead to stamp their ticket to the semifinals and a clash with Germany in Milton Keynes on Wednesday, sparking jubilant scenes of joy among players and coach Corinne Diacre.

“I’m very proud because this team aimed at a big target. This team gives absolutely everything,” Diacre told reporters. “I like the fact that the players gave it their all and kept plugging away. They stayed true to our game plan.

“We would like to have scored earlier but we were up against an incredible Dutch goalkeeper. In terms of our fitness, the teams gave lots of answers tonight, defensively too.

“We have been rewarded for our effort. We are here to build history – the players and staff want to make history for ourselves and there is still a bit of a way to go,” she added.

In Germany, the French face a team who won six consecutive Euro titles between 1995 and 2013. The eight-time champions sealed their place in yet another semi-finals with a 2-0 win over Austria, but for France, it is uncharted waters after a heartbreaking run of early exits.

“Tonight, we managed to get past this stage. We produced a very big performance. We’re very happy and now we can savour this qualification for the semi-finals.”

By contrast it was pictures of exhaustion and despair for the Dutch players, many of whom sunk to the floor at the full-time whistle.

The return of prolific star striker Vivianne Miedema from Covid-19 had looked set to boost the defending champions, but the Arsenal forward looked isolated throughout as the Dutch were forced deep to repel wave after wave of French attacks.

“It was a tough game for her, she had nothing left at the end,” Parsons said of Miedema.

There’s not a player with anything left in the tank, in their bodies. They gave everything. The first half we were hanging on by a thread.

“When we were better in attack and created chances, they were able to break. But our heroic defending was very, very impressive, in almost every moment of the game. Everyone stepped up.”

France or Germany will face the winner of host England’s semifinal matchup with Sweden in Sheffield on Tuesday.