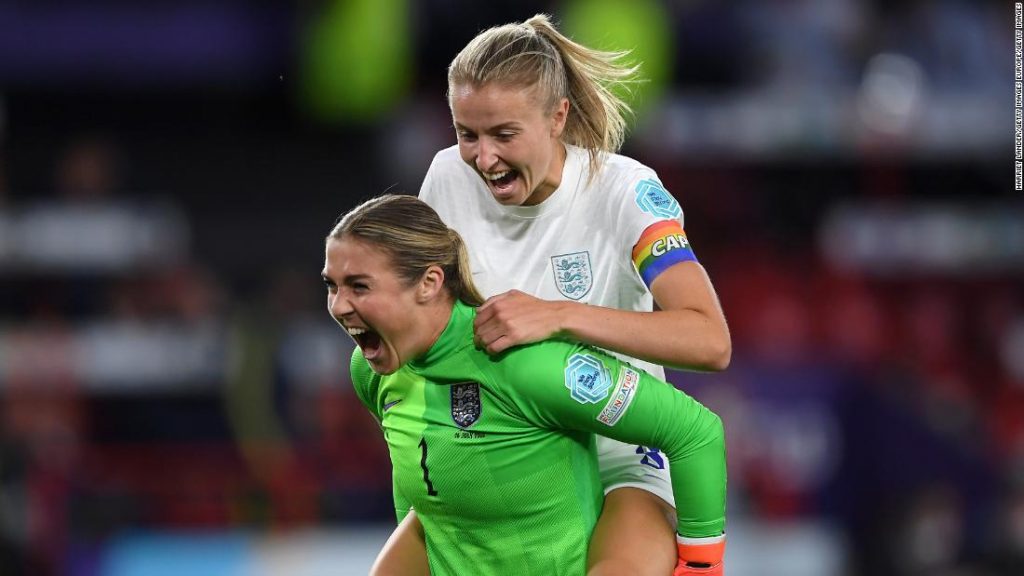 After the two semifinal matches, a total of 487,683 fans have attended the games so far, more than doubling the previous record of 240,055, set at Euro 2017 in the Netherlands.

That’s without taking into consideration the historic attendance expected at Wembley Stadium for Sunday’s final. Around 87,000 fans are set to be at the home of English football, which would smash the current attendance record for a Euros final — men’s or women’s — of 79,115, set at the 1964 final between Spain and the Soviet Union at the Bernabeu in Madrid.

UEFA, European football’s governing body, says nearly 100,000 children have attended matches so far at Euro 2022, while 47% of all fans have been women.

Of course, it certainly helps that home fans have been fortunate enough to watch arguably the most talented England women’s side of all time.

The 8-0 dismantling of a dangerous Norway side, ranked just two places below England, and the 4-0 drubbing of Sweden, the second-best team in the world and a team England had previously beaten just three times, will go down as some of the most eye-catching in the Lionesses’ history.

But the path to the final wasn’t always a straightforward one. England struggled to find its rhythm in a tough opening win against Austria, before being pushed all the way in a comeback win over Spain in the quarterfinals.

England, though, will certainly be glad it has been put to the test ahead of its most difficult match yet. Germany boasts a quite extraordinary record in the European Championship, winning eight of the 12 editions that have been contested and reigned over the Euros crown for 22 years until defeat at the quarterfinal stage in the Netherlands five years ago.

Head coach Sarina Wiegman, who guided her native Netherlands to victory at Euro 2017, is well aware of how important an England win on Sunday could be for women’s football in the country.

“I think we have been an inspiration for the country already,” she told reporters on Friday, per Reuters. “You know when you win a major tournament it really makes a difference and that would make me very proud. But I don’t think further than that. Most of the time you don’t realise the impact until probably 15 years later.

“We approach this game exactly the same as every other game we have played. We don’t talk about the rivalry between England and Germany; we want to show how good we are and play our best game.

“There’s so much eagerness in this team to win, and so much resilience. We want so badly to show again we are the best and to play our best game. That’s what we’ve been trying to do all the time and then hopefully, that will bring us to win.”

‘Nothing left to lose’

Alexandra Popp, who has become Germany’s star with six goals in five games at these Euros, is one of the best feel-good stories of the summer.

The 31-year-old missed the Euros in 2013 and 2017 through injury and, for a while, it looked as though she might miss this one after injuring her knee last year, but Popp was finally able to compete when the tournament was postponed by a year due to the Covid-19 pandemic.

She has certainly made up for lost time and was visibly emotional after scoring in the opening win against Denmark, sinking to her knees and covering her face with her hands.

“I think the pressure is more on the English side, precisely because it takes place in their own country,” Popp told reporters at a press conference on Friday. “We know that from 2011 [when Germany hosted the World Cup], suddenly everyone expects something from you.

“We have nothing left to lose. With that attitude we can go into the game completely free.”

There certainly seem to be no nerves in the German camp ahead of the final, with Popp turning up to the press conference wearing a mustache hidden under her mask. “Hello,” she said, greeting reporters in a gruff voice.

After her match-winning performance against France in the semifinals, German outlets FUMS and Der Postillon ran satirical reports saying that men’s national team head coach Hansi Flick had called up a new striker for Qatar, accompanied by a photo of Popp in a mustache with the pseudonyms Alexander Bopp and Alexander Papp.

The forward will no doubt be the biggest threat England faces on the Wembley pitch come Sunday and it’s likely a moment of instinct from Popp or Mead could decide the game.

These two teams boast a brilliant defensive record at this tournament, having each conceded just one goal, and it’s likely their stingy back lines will be difficult to breach in the final.

The quality on display at Euro 2022 only emphasizes the accelerated growth of the women’s game across the continent in recent years, as football federations have finally started to seriously invest in their teams.

“I really have to say I love women’s football, it’s outstanding,” Klopp said at a press conference on Thursday.

“The quality of the tournament is insane. England is doing exceptionally well. I saw three games of Germany, they’ve been doing really well as well. It’s a really good final — two intense teams facing each other.

“As much as I love England, in this specific case my heart is on the German side, but the better team might win and I’m completely fine with that. At a sold out Wembley with an English crowd, it will be a massive challenge for Germany.

“Most important is the face women’s football showed, it’s a fantastic game. Women’s football, over the last few years, exploded in their development. It’s tactically and technically on an incredibly high level. The intensity of the games — physically it’s really, really good and I love watching it.

“England are slight favorites playing at home, but Germany has a chance.”

After defeat in the men’s Euros final last summer, England fans will be desperate to avoid double heartbreak. But against a Germany team desperate to reclaim its European crown, that is an entirely likely possibility.