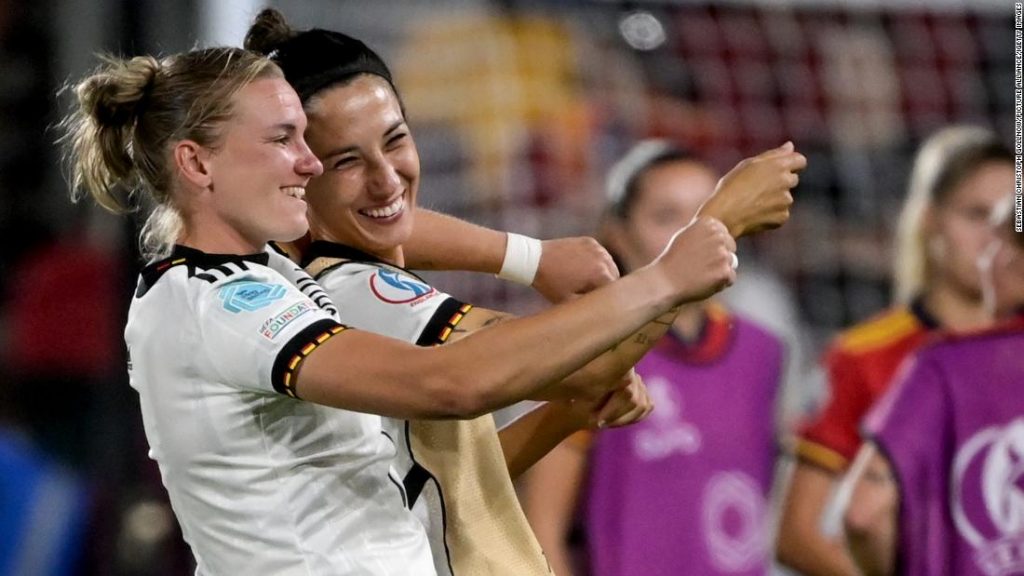 An early goal from Klara Bühl settled any nerves for the German side at the Brentford Community Stadium, before Alexandra Popp doubled the lead later in the first half.

The clinical victory means that with a game to spare, Germany is through to the next stage of the tournament as it sealed top spot in Group B.

Bühl said the team was “very happy and proud” to have progressed to the next stage, and Germany’s manager Martina Voss-Tecklenburg praised the spirit of her side.

“It was exactly that spirit that everyone thinks of with the Germany team, but it was also tactically a great performance,” she said, according to the Guardian. “Some of the players may have cursed because they didn’t touch the ball much, but they were rewarded with two goals.”

Spain was billed as one of the pre-tournament favorites, primarily down to the success of Barcelona’s women’s team as one of Europe’s dominant club sides.

However, despite impressing with a 4-1 victory against Finland in its opening game, Spain’s chances at this year’s competition were dealt a massive blow on the eve on the tournament.

2021 Ballon d’Or winner Alexia Putellas ruptured her left anterior cruciate ligament, meaning the team would be without its most in-form player along with its all-time top scorer, Jenni Hermoso, after she was also ruled out with a knee injury.

And on Tuesday night, the pair’s absence was keenly felt. Despite having 70% possession of the ball, La Roja wasn’t able to convert any of the goalscoring chances it fashioned, lacking attacking edge without its two star offensive weapons.

And on the other side, Germany was ruthless when it counted.

Despite all of Spain’s neat passing, it was a mistake with the ball that gifted Germany its first goal. A poor pass from Spanish goalkeeper Sandra Paños fell straight to Bühl who clinically fired home to give Germany a lead within the first five minutes.

And, just a few minutes before halftime, Germany doubled its lead, with Popp heading home from a corner.

Popp, who missed both Euro 2013 and 2017, only returned from a long-injury layoff in March, but it is her second goal in as many games having scored against Denmark in the opener.

While Germany is through to the next round and will avoid host England with the top spot in Group B, Spain’s future participation hangs in the balance.

It faces Denmark in its final group game on Saturday, with the winner finishing second and progressing while the loser will head home.

“I hope this will help us for the next game and for the future,” Spain manager Jorge Vilda said. “We have to prepare ourselves mentally. After the goal, we may have played our best 30 minutes.”