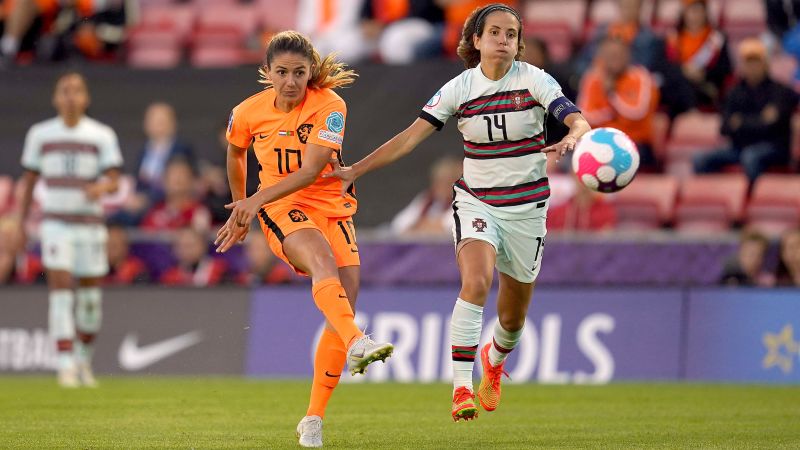 With the score level at 2-2, Daniëlle van de Donk fired a perfect strike into the top right-hand corner of the goal from the edge of the penalty box, sealing a 3-2 victory for The Netherlands against Portugal in their Women’s Euro group stage match-up.

“I almost never score goals like [my winner],” van de Donk said according to UEFA.com.

“Normally, I only score tap-ins. I know where the ball’s going, and I tap it in. For this one, I don’t know what was happening!”

It had been an enthralling game in which Portugal – the second-lowest ranked side in the tournament – staged a comeback from two goals down to level the affair but was eventually outclassed by the defending champion.

The Netherlands’ preparation had been disrupted by injuries and Covid which left it without four of its best players including captain Sari van Veenendaal and all-time leading goalscorer Vivianne Miedema.

Portugal almost capitalized on the Dutch misfortune immediately, but an early attempt was ruled out for an offside.

Two minutes later, however, the Netherlands found its rhythm with two corners taken by Sherida Spitse in quick succession. On the second, Damaris Egurrola’s header found the back of the net to open the scoring.

As in its match against Switzerland on Saturday, Portugal conceded another early goal less than 10 minutes afterwards.

Spitse delivered another perfectly executed corner and, although Portugal initially repelled the Dutch attack, a goal seemed inevitable as the ball ricocheted around the penalty box before Stefanie van der Gragt eventually headed the ball into the net to double the lead.

Despite finding themselves trailing by two goals, the Iberians began creating chances.

One promising attack could only be stopped by a Dutch foul and Carole Costa converted the resulting penalty to drag her side back into contention 10 minutes before halftime.

Portugal continued its comeback, starting the second half with intent.

A brilliant save from Dutch goalkeeper Daphne von Domselaar tipped the ball over the crossbar but, undeterred, the Portuguese attack continued to press and crafted another opportunity a minute later which Diana Silva finished with a header.

After leveling from two goals down, all the momentum lay with Portugal, and it took van de Donk’s otherworldly strike to put the reigning champion ahead again.

“We competed, and that was our goal for this game, with courage, ambition, knowing who we were up against,” said Portugal coach Francisco Neto, according to UEFA.com.

“There were times when we weren’t as organized as we should have been, and again some small details made the difference. But my team showed an attitude, a determination that leaves me feeling so proud of what they did.”

The Netherlands now sits on the cusp of a quarterfinal spot at the top of its group with one more group stage match to play against Switzerland on Sunday.