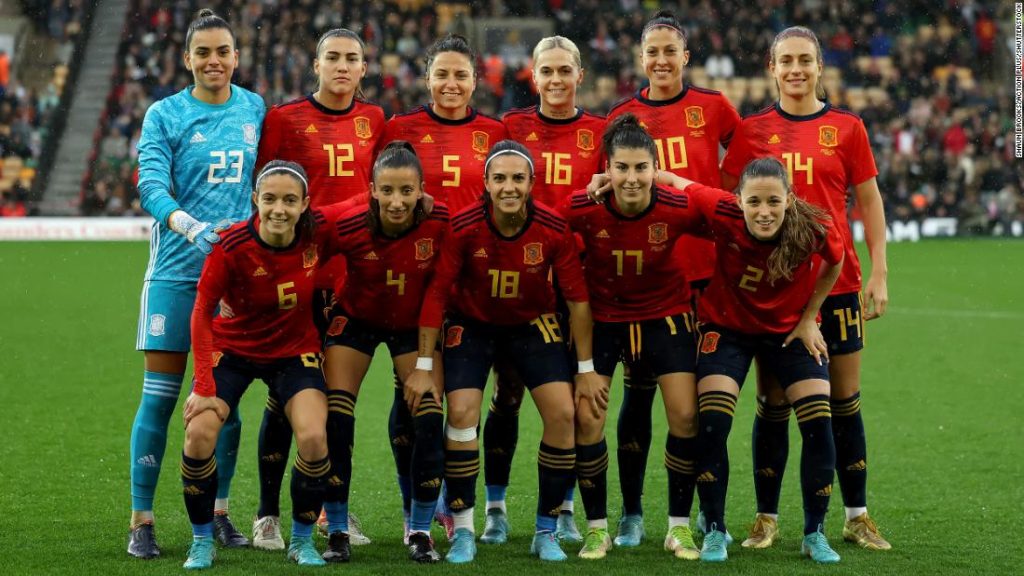 The national team’s ascent from also-ran to ever-present in major competitions over the past decade has been one of the more remarkable rises on the women’s international stage.

Euro 2022 was supposed to showcase how a burgeoning domestic league, historic payment agreement and dedicated youth system culminated in Spain, who qualified for the tournament undefeated, becoming an international force.

In the opener against Finland, Spain impressed in a 4-1 victory but Tuesday’s clash of the behemoths, when La Roja faces Germany in Group B, will be a sterner test for a team without two of the world’s best players.

On the eve of the tournament, Spain was dealt its second major blow in as many weeks. After it was announced in June that all-time top scorer Jenni Hermoso would miss Euro 2022 with a knee injury, La Roja was then given the crushing news on July 5 that totemic midfielder Alexia Putellas had ruptured her left anterior cruciate ligament.

It’s difficult to overstate just how important Putellas is to this team: a prolific goalscorer, mercurial playmaker and a player with the individual genius to single-handedly win any game.

Spain will now have to try and compete without two of the best players in the world, with Putellas and Hermoso coming first and second respectively in the Ballon d’Or standings in 2021.

“Alexia, it’s very strong to say it, but she is everything,” Amalia Fra, a football expert for Spanish sports newspaper AS, told CNN Sport. “She is the whole team because she’s like a compass in the middle of the pitch which is distributing and moves the opposing team.

“On top of that … she goes up and makes herself a No. 9 and scores a goal for you. She makes it so the entire play of La Roja is based on her, but we mustn’t underappreciate the rest of the team because we have amazing central defenders; Mapi León and Irene Paredes are among the best in the world.

READ: Everything you need to know about Euro 2022

“In midfield, Aitana [Bonmatí] and Patri [Guijarro] are also the best and her game with them, with whom she plays every day at Barça, makes the team flow.”

Now, in the absence of Putellas and Hermoso, it will be up to the likes of Paredes, León, Bonmatí and Guijarro to lead Spain’s women to their first major international trophy.

Prior to the 2015 World Cup in Canada, Spanish women’s football was unrecognizable to the standard it sets today.

Fra recalled players having to travel hundreds of kilometers each day for training and said any form of nutrition plan was non-existent.

“It was after the 2015 World Cup, which was the first time that Spain qualified for the World Cup, when Spain really began to commit to women’s football and the players began to be professionals,” Fra said.

“They began to receive financial allowances and then they [the federation] also bet on creating a more powerful league and professionalizing it, which we would almost say is something unprecedented.

“From then on, there has been an exponential growth of the team in terms of players, physique, resources, and even of the fact that the players, as the national team coach Jorge Vilda said, are now professionals and can make a living from this.”

Back in early 2020, the players in the women’s first division struck a historic league-wide agreement that guaranteed every footballer an annual salary.

The deal was the culmination of years of gradual improvement, which also included a television deal and a major title sponsor with renewable energy company, Iberdrola.

But the path wasn’t easy. In November 2019, after their demands for a minimum wage were not met, the footballers boycotted all eight first division matches one weekend, after 189 representatives from the league’s 16 clubs voted 93% in favor of taking strike action.

However, with the deal eventually secured, players in the first division could begin to solely dedicate their working lives to football.

“Today, there are still many players from the Spanish national team who still study because they believe that their career is too short, and what they earn isn’t enough to live the rest of their lives,” Fra said.

“So they keep studying, they keep educating themselves … but today, a player from any team in the league can live with what she earns on her team and with the national team.

“In addition, they have a bonus that with the Euros they are going to have some allowances and image rights that are going to complement those salaries.”

Negotiations about the new agreement coincided with the beginning of Barcelona’s meteoric rise to the pinnacle of European football.

Earlier in 2019, Barça had become the first Spanish team in history to reach either the semifinals or final of the Women’s Champions League, eventually losing 4-1 to powerhouse Lyon in the final.

Two years later, the Azulgrana would finally get its hands on European football’s most coveted prize, as it hammered Chelsea 4-0 in the final to announce what it hoped would be a power shift in the European game.

Barça reached the final once again this year, where it fell to Lyon, and many of the players that featured in Barcelona’s rise have played an integral part in the Spanish national team’s climb to a record high of seventh in the world rankings.

Certainly, parallels can be drawn with the men’s national team that dominated world and European football between 2008 and 2012 with a bulk of players from Pep Guardiola’s all-conquering Barcelona.

Eight players — it was nine prior to Putellas’ injury — from the current Barcelona women’s team have been called up to the 23-player squad for Euro 2022, and six started in the team’s opening match.

Like Guardiola’s Barça and the Spain team of that time, the style of this national team is heavily influenced by the Catalan giant.

“Barcelona is the one that has the singing voice,” Fra explained. “Spain plays basically the same as Barça; tiki taka, touch and verticality in attack. So it’s an honor that Barca has put in so much because that has made the national team grow.

“The styles are very similar. What’s more, the players who carry the weight in the national team — which are the three midfielders Aitana [Bonmatí], Alexia [Putellas] and Patri Guijarro — they have the Barça essence, they are from the academy.

“Their references when they were little were Xavi and [Andrés] Iniesta. They looked up to those players, they created that style at Barça, they play like that and they are the ones who carry the dominant weight and are the ones who make that team work. Basically, I would say that it is exactly the same as Barça in 2010.”

Vilda took over after former head coach Ignacio Quereda was ousted after 27 years in charge following Spain’s disappointing performance at the 2015 World Cup in Canada.

It was the first time the women’s national team had qualified for a World Cup, but after finishing bottom of its group, the players subsequently came out and denounced a lack of professionalism within the setup.

Since failing to reach the 2011 World Cup, La Roja has qualified for every major international tournament and has already secured its place at next year’s World Cup in Australia and New Zealand.

Vilda was appointed after guiding the women’s under-17s and under-19s to multiple European Championship titles and many of the players who played a key part in the success of those teams are now integral pieces in the senior side.

In qualifying for Euro 2022, Spain won seven and drew one match, scoring 48 goals and conceding only once, but Fra urged caution.

“Reaching the semifinals, of course, would be a success,” Fra said. “We must not lose sight of the fact that Spain has never reached a final, not even a semifinal. They don’t have that experience that other teams have, such as Germany, England, France, Sweden or Norway.

“It’s true that the journey of this team in recent years has made [fans] believe and invited them to dream, but Jorge Vilda has lowered the air of expectation a bit because he believes it’s negative that people arrive with such high expectations, that there is too much is belief in something that we have never done.

“If they don’t reach the semifinals, it will not be a failure. A failure would be, for example, not going through the group stage because I think that Spain has that capability and has to go through, but it’s another thing that we already require the team to be at Wembley on July 31.”

It will undoubtedly be a tough ask to compete against some of the world’s best sides without its two star players, but this squad still boasts a plethora of talent that not many teams will relish the prospect of facing.