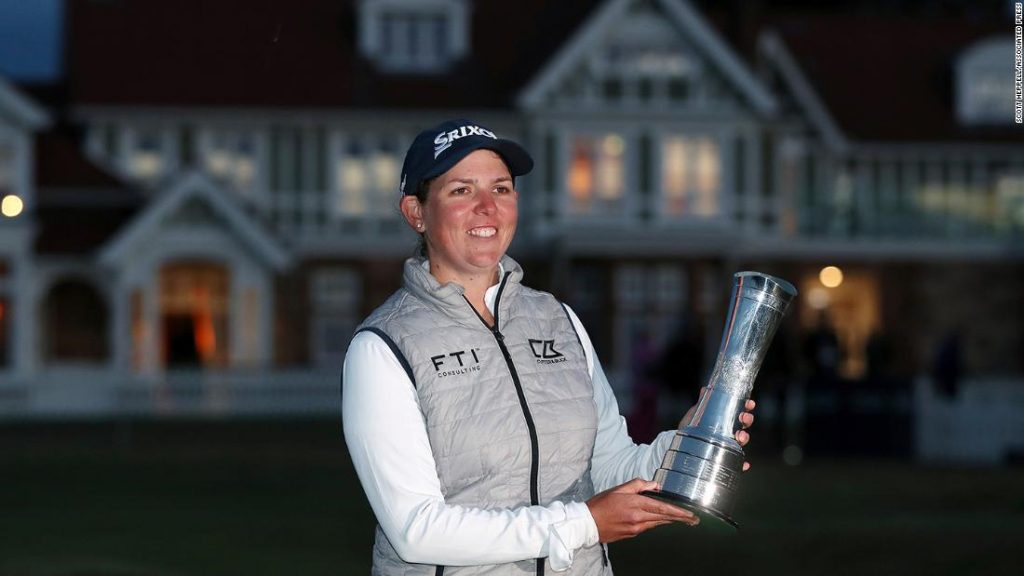 The South African had held a five-stroke lead heading into Sunday’s final round, but a disastrous triple bogey at the 15th hole saw three-time major champion Chun In-gee draw level at 10-under to force a sudden death playoff.

Matching each other for par, bogey, par, the pair could not be separated after three rounds of the 18th hole, yet the breakthrough came at the fourth time of asking when Chun drove her tee shot into a bunker.

As the South Korean bogeyed, a superb approach shot from the sand left Buhai needing to tap home to win with par, and the 33-year-old made no mistake to take her maiden major victory at the first ever Women’s Open held at Muirfield.

It makes Buhai the first South African to win the event since Alison Sheard in 1979 and ends a 34-year wait for the country’s next women’s major champion after Sally Little’s victory at the du Maurier Classic in 1988.

Playing host to women golfers for the first time, Muirfield already held special significance for the South African men’s game as the stage of first Open wins for legendary duo Gary Player and Ernie Els in 1959 and 2002, respectively.

“To follow those two greats [Els and Player], two of my idols growing up, and for us to play here for the first time at Muirfield, making history, I’m very, very honored and very, very proud to be South African right now.

“I’m a little overwhelmed to be honest. I’m trying to take a breath, but it’s obviously fantastic to win this championship … it’s a dream come true,” she added.

‘It’s been a long journey’

Having turned professional in 2007, triumph at Muirfield marks Buhai’s first win on the LPGA Tour, with the $1,095,000 prize lifting her career earnings to $3,503,926, according to the LPGA website.

The South African has won three times on the Ladies European Tour — including an early win at the Catalonia Ladies Masters — but after a fifth-place finish at the 2019 Open in Woburn had marked her best career performance at a major, Muirfield represents an unprecedented new peak.

“I turned pro when I was 18, there were a lot of things expected of me. I won straight off the bat on the Ladies European Tour, but this game has a way of giving you a hard time.

“I’m just so proud of how I’ve stuck it out. I have said, the last four or five years, I’ve finally started to find my feet on the LPGA and felt I could compete, and although I’m 33 now, I feel I’m playing the best golf of my career.

“It’s been a long journey, but man, it’s all worth it right now.”

Buhai’s first major win was a fitting encapsulation of that journey. After roaring into a commanding lead by shooting 70, 65, 64 across the first three rounds at the par-71 course, the South African looked to be sliding towards an agonizing collapse at the close.

After sinking eight birdies Saturday, Buhai made just one throughout the entirety of the final round, as her four-over 75 opened the door for Chun to reel her in with a one-under 70.

Seeking to add the British Open to her three major titles, including a win at the PGA Championship in June, a runner-up finish marked the closest the South Korean has come to winning the event.

“I’m always happy to finish in a good position,” Chun told reporters. “I felt like I had a great season, and I have more tournaments coming in the future.

“I think now I have a lot of confidence I can play well at links courses.”

Despite an eagle at the fifth hole, Japan’s Hinako Shibuno missed out on making the playoff by a stroke after carding an even-71.