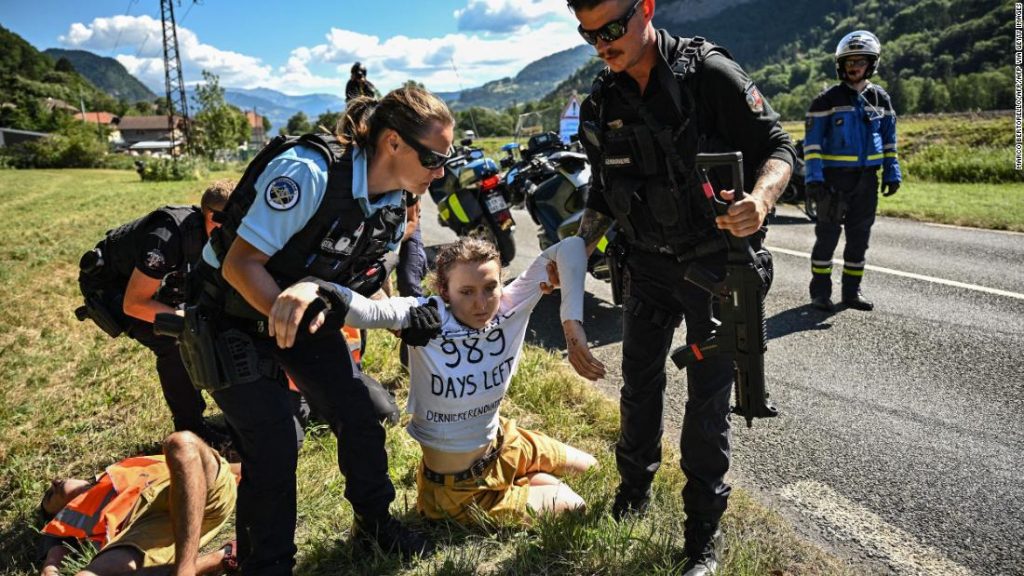 All riders were forced to stop as the protesters sat across the road to block a clear and safe passage forward.

The broadcast showed authorities on the scene addressing the issue as colored smoke filled the air. Cameras captured a moment when the stage leader Alberto Bettiol deftly rode his bike through the protesters but ultimately had to halt.

It appeared that most of the riders were held back to gather and wait as the road was cleared.

The Tour de France race center said, “The race is neutralized. The race will resume with the same time gaps once the road will be cleared.”

The organization said in a statement on Twitter that it “interrupted the 10th stage of the Tour de France between Morzine and Megève in the commune of Magland to stop the mad race towards the annihilation of our society.”

The statement said that the group “can no longer remain spectators of the ongoing climate disaster. We have 989 days left to save our future, our humanity.”

It continued: “Our goal is to force legislation to drastically reduce France’s emissions, starting with energy reform, the area most likely to bring together social and climate justice today.

“This is our last chance to avoid catastrophic and irreversible consequences: deadly heat, extreme weather events, famines, mass migrations, armed conflicts… and this is for all the next generations of humans.”

The incident occurred 36 kilometers (22.37 miles) short of the finish line in Megève, France.

Stage 10 of the famous French race restarted after around 15 minutes of disruption caused by the protesters.

CNN has reached out to Tour organizers for comment.