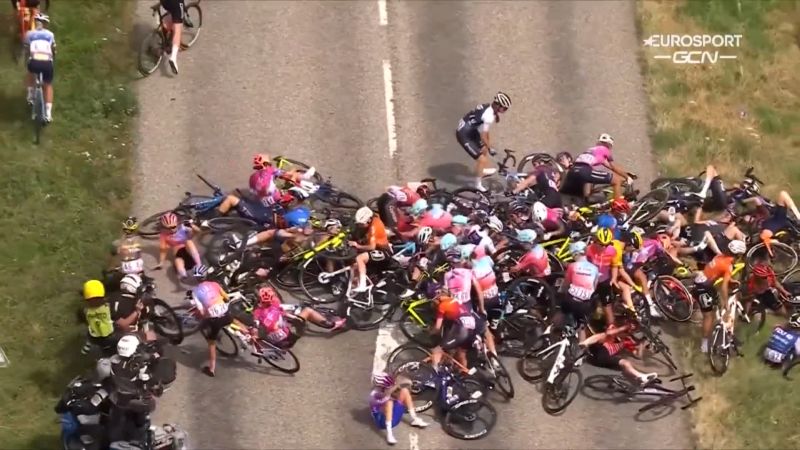 A huge crash during Stage 5 of the Tour de France Femmes on Thursday left one rider needing hospital treatment.

With 50km left of the longest stage of the race, an incident on a straight bit of road between Bar-le-Luc to Saint-die-des-Vosges quickly escalated into an enormous crash which saw half the field off their bikes.

With dozens involved, it took several minutes for riders to untangle themselves from each other’s bikes.

Many riders had bumps and bruises, with SD Worx’ Chantal van den Broek-Blaak having to have her right arm bandaged by medical staff in the team car while riding and former Italian national champion Marta Bastianelli battling through tears to continue.

However, the massive pileup spelled the end of Movistar’s Emma Norsgaard’s race after she was forced to pull out with the injuries she sustained.

Although she could stand, the Danish cyclist had to leave in an ambulance. The team said on Instagram that the 23-year-old “hit her head, neck and left shoulder into a pile-up and had to be transferred to a hospital in Épinal.”

On Friday morning, Movistar announced that after undergoing scans, Norsgaard had no fractures and will “remain under medical observation and rest for 24 hours, to monitor any after-effects from the incident.”

“Thanks for all the messages. It’s really nice of all of you,” Norsgaard said. “I’m ok, I’m traveling back home to Girona and I only need some rest but the rest is ok.”

“This is the danger when riders become relaxed in the bunch and you can almost be fooled into a false sense of security,” she said on Eurosport.

“If you’re too relaxed, if riders aren’t concentrating, then crashes can happen. The speed in the bunch must have been so high for so many riders to have been impacted.”

And at the end of the 175.6km stage, the longest in the modern history of women’s World Tour racing, Lorena Wiebes of Team DSM finished first.

The Dutch rider, also winner of the shortest stage of the Tour de France Femmes on Sunday, showed why she’s the best sprinter around, while world champion Elisa Balsamo came second and Marianne Vos third.

However, Vos’ four bonus seconds saw her extend her lead in the general classification to 20 seconds.