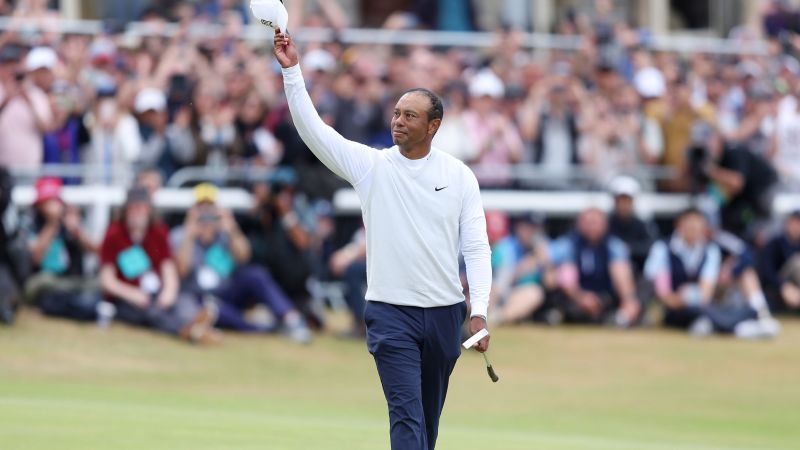 No sooner had Tiger Woods taken his first step across the Swilcan Bridge, the thousands of fans at St. Andrews crammed behind ropes, filling grandstands and squeezed onto overlooking balconies rose as one to applaud.

The ovation soundtracked the entirety of the 15-time major winner’s long walk down the Old Course’s 18th fairway, as a visibly emotional Woods – removing his hat to salute the reception – wiped away tears.

It remains to be seen whether one of golf’s greatest icons has played his final professional shot at one of the sport’s most iconic venues, but if this was to be goodbye, then it was a fitting send-off.

“The fans, the ovation and the warmth, it was an unbelievable feeling,” Woods told reporters.

To play his favorite course again had been the 46-year-old’s main focus during the grueling recovery process he has endured since a car accident in February 2021 left him with serious leg injuries.

A three-time Open champion – twice a winner at St. Andrews – any hopes of Woods lifting a fairytale fourth Claret Jug were dashed early after a difficult first round left him tied for 146th on his return to the clubhouse and 14 shots adrift of the leader.

It left him needing a miracle to make the cut and extend his potential farewell tour to the weekend. Despite an improved second round performance, a string of agonizingly short putts extinguished any faint chances of a fabled comeback as he finished nine over par.

Speaking on the eve of the event, Woods – despite asserting he felt “a lot stronger” – had been candid about accepting the new limits of his body. Having withdrawn from the PGA Championship in May, he completed his rounds at the flatter St. Andrews course but could be seen limping during parts of Friday’s session.

And with the Open not potentially returning to the ‘home of golf’ until 2030, Woods admitted he may have played his last Open at the venue.

“I’m not retiring from the game, but I don’t know if I will be physically able to play back here again when it comes back around,” Woods said.

“I’ll be able to play future British Opens, yes, but eight years’ time, I doubt if I’ll be competitive at this level.

“Life moves on, and I think that’s what people understand. They knew my circumstances this year, of just playing, period. I was very lucky to have had a great team around me to get me to where I was physically able to play three times this year and very thankful to all of them for getting me to this spot.”

With an estimated 290,000 spectators around the Old Course this week, for much of the event’s first two days, it felt like most of them were following Woods around the course, such was the fanfare wherever he went.

Crowds piled behind the ropes whenever he was at the tee, with three particularly enthusiastic Woods fans dressed head to toe in Tiger costumes. Though shooting just four birdies across the opening two rounds, each one was met with a level of crowd roar that suggested he was once again contending at the top of the leaderboard.

Jean van de Velde finds himself up a creek without a paddle, 1999 — The mother of all golfing implosions, Frenchman Jean van de Velde led by three shots on the final tee of the 1999 Open at Carnoustie. But after an errant tee shot, an overhit iron and a hack out of long grass, his ball had found the Barry Burn stream. Van de Velde waded into the Burn, trousers rolled up, contemplating playing his shot out of the water rather than take the penalty drop. He retrieved his ball in the end and took the penalty, only to chip into a bunker. His putt could only force a three-way playoff, which the Frenchman subsequently lost. The image of van de Velde’s mirthless smile in the stream is so iconic, it’s easy to forget the Frenchman never actually played the shot.

Greg “The Shark” Norman flounders in the beach, 1989 — The Aussie known as “The Shark” was on blistering form on the final day at Royal Troon in 1989. Starting Sunday seven shots behind American Mark Calcavecchia, Norman stormed to parity with a course-record score of 64 to force a three-way, four-hole playoff. Two birdies and a bogey in the first three holes put Norman in contention. Then everything unraveled: the Australian found a bunker off the tee, then another bunker with his second shot. His ball went out of bounds with his third and that was that.

Tom Watson learns “perfect” isn’t always good enough, 2009 — To this day, the American thinks he hit the “perfect” approach shot on the 18th at Turnberry in 2009. Watson needed par to win the Open and would have become the oldest golfer to do so. But the American caught a flier out of a tailwind and the ball raced through the green and into the long grass. A bogey meant Watson was suddenly in a four-hole playoff with compatriot Stewart Cink, where the older player ran out of steam. The incident is one of golf’s great “what might have beens.”

Thomas Bjorn digs his way out of a hole, 2003 — Leading by two strokes with three holes to play at Royal St George’s in 2003, Thomas Bjorn had one hand on the Claret Jug. Then he took a trip to the beach — more specifically, a bunker on the par-three 16th. It took the Dane three shots to escape the sand trap and he carded a double bogey. Another dropped shot on the 17th and the dream was over.

Adam Scott fluffs a four-shot lead, 2012 — Australian Adam Scott was in cruise control with a four-shot lead at Royal Lytham & St Annes in 2012. But the course well and truly ground the then 32-year-old down. Bogeys at the 15th, 16th, 17th and Scott was suddenly tied with South African Ernie Els for the lead. But a missed seven-foot putt and yet another bogey led the Australian to watch on as Els lifted the Claret Jug — Scott made slight amends by winning The Masters the following year.

Doug Sanders misses a three-footer, 1970 — On the 18th green at St Andrews, Doug Sanders had two putts to win The Open. His first put him within three feet — the kind of putt Sanders would sink blindfolded with one hand tied behind his back any other day. But the American cut short his pre-shot routine and missed not just by a little, but by a lot, the ball veering right of the hole. The error resulted in an 18-hole playoff the next day with Jack Nicklaus, who won by a single shot.

Tiger Woods swinging (and swinging and swinging) in the rain, 2002 — On a fair day at the Open, life is good. But when it gets wet and wild, the major is a different beast. Woods, who at the time was the reigning Masters and US Open winner, was aiming for a Grand Slam when he arrived at Muirfield in 2002. Then came the rain. In the third round, the world’s greatest golfer endured one of the most torrid days of his career, carding an 81 to leave him six over par for the tournament. It was the worst score of his professional career, but he was still able to find the funny side of a bad day, holing his first birdie of the round on the 17th and bowing to the crowd.

John Cook gets pipped at the post, 1992 — What happen at Muirfield in 1992 is proof that an Open can pivot on the smallest of moments. The American had a two-shot lead with two holes to play, but after missing an eagle chance — then missing a two-foot putt for birdie on the 17th — he carded a bogey on the 18th. Nick Faldo, playing in the last pair of the day, was resurgent, capitalizing on Cook’s miss and romping home to a one-shot victory.

Hale Irwin’s swing and a miss, 1983 — Hale Irwin and Tom Watson were going toe-to-toe in the final round at Royal Birkdale in 1983, and Irwin needed a par on the 14th hole to keep up with the pace. He’d nearly holed out from 20 feet for a birdie and was inches away. Then, in a moment of casual carelessness, he went to tap in his next putt and … missed. His putter hit the ground and bounced over the ball, costing him a stroke. The worst part? Irwin finished just one shot behind Watson. (Pictured: Irwin not making the same mistake at the Ryder Cup in 1981.)

Ian Woosnam’s double trouble, 2001 — Tied for the lead going into the final round, Welshman Woosnam was chasing a late career major at Royal Lytham & St Annes in 2001. He got off to a flier, nearly scoring a hole-in-one on the first hole. What would’ve become a birdie turned into a bogey, however, when it was discovered that he had 15 clubs in his bag — one more than the legal limit. A two-stroke penalty was the result, and the offending wood was promptly hurled out of the bag by Woosnam. He never recovered his momentum and finished tied third.

His level of respect among fellow players was also evident, with Rory McIlroy and Justin Thomas – moving down the adjacent first tee as Woods walked the 18th – both tipping their cap as he passed.

Earlier, world No. 1 Scottie Scheffler said he hoped he had not seen the last of Woods at St. Andrews.

“He’s a pretty resilient guy and he loves to compete,” he told reporters.

“We’ll see what he has in store for us the next few years. Any time you can see that guy out on the golf course, especially The Old Course, it’s really special.

“For us, as players, to have him around is pretty cool. When he got in that car wreck, didn’t know if we’d have him back. Just to have him out here playing golf is pretty special for all of us.”