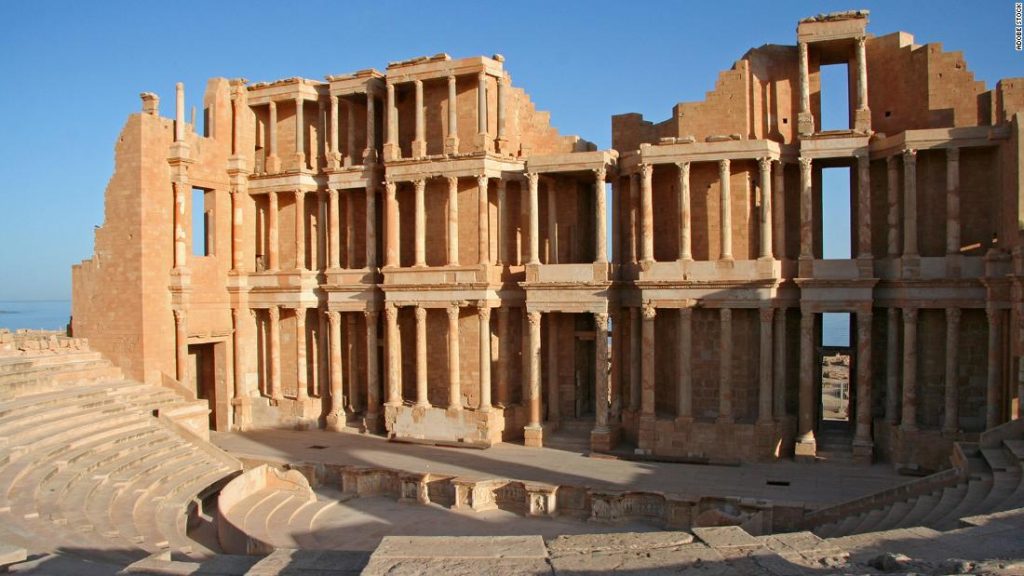 (CNN) — On the shores of North Africa, ancient cities have stood for millennia. The columns of Carthage, in modern-day Tunisia, are a reminder of the once bustling Phoenician and Roman port, and along the coast in what’s now Libya, lie the majestic ruins of Sabratha’s Roman amphitheater close — perhaps too close — to the sea.

Africa’s iconic natural sites date back even further, such as the ancient coral reef of the Seychelles’ Aldabra Atoll in the Indian Ocean, thought to be around 125,000 years old.
But extreme weather events and rising sea levels mean that all three — and around 190 other spectacular heritage sites that line Africa’s coasts — will be at risk of severe flooding and erosion in the next 30 years, according to a recent study published in the journal Nature Climate Change.

Sea levels have been rising at a faster rate over the past three decades compared to the 20th century, the research says, and climate change hazards such as floods, heatwaves and wildfires are becoming more common.

The ancient Roman theater of Sabratha, in modern-day Libya, is one of the sites expected to be in danger by 2050.

It found that 56 sites are currently in danger if a “once in a century” flood struck, and that by 2050 — if greenhouse gas emissions continue on their current trajectory — this number could more than triple to 198 sites.

“There is a local value, an international value, an economic value … and an intrinsic value (to these heritage sites),” Nicholas Simpson, an author of the study and postdoctoral research fellow at the African Climate and Development Initiative at the University of Cape Town, tells CNN. “There are some monuments and sites and spaces that we don’t want lost for the next generation.”

Simpson believes the findings serve as an important wake-up call to increase climate adaptation measures and funding across the continent. “There’s an important message of loss and damage from climate change to heritage, which we hope will mobilize greater intent (and) action,” he says.

A first for Africa

This is particularly pertinent in Africa, where the links between climate risk and heritage have been mostly ignored, says Simpson. Past scientific research has identified cultural sites endangered by climate change in the Mediterranean, Europe and North America, but this is the first continent-wide assessment of Africa.
“(The link between) climate change and heritage in Africa is gravely under-researched, and compared to other continents, we know very little,” he says, adding that a 2021 study found that between 1990 and 2019, research on Africa received just 3.8% of climate-related global research funding.

In this latest study, Simpson and his colleagues mapped out a total of 284 heritage sites that are recognized or under consideration by the UNESCO World Heritage Centre and the Ramsar Convention on Wetlands of International Importance, in the 39 countries that comprise the African coast.

They overlaid this geographic data with a highly intricate model projecting sea level rise and global warming levels under both a moderate and high emission scenario. The moderate scenario assumes global greenhouse gas emissions will stabilize before the end of the century, while in the high emission scenario — sometimes referred to as “business as usual” — they continue to rise, consistent with the current global pace, until 2100.

From there, the researchers calculated the likely percentage area of the site exposed to a “once-in-a-century” extreme coastal flooding event.

Simpson explains that such an event is an important indicator in understanding future climate risk, because it is these extreme events that are likely to cause severe damage, and climate change is increasing their likelihood and frequency.

According to the research, North Africa has the largest number of threatened sites — from the ancient ruins of North Sinai that stretch between the Suez canal and Gaza and were once well-traveled by Egyptian pharaohs on their way to Canaan, to Tipasa, an ancient Phoenician trading post in present-day Algeria that was conquered by Rome and turned into a strategic base by Emperor Claudius during the conquest of Mauritania.

Many of North Africa’s ancient cities lie dangerously close to the sea, such as Tipasa in modern-day Algeria.

Simpson caveats this, noting that while North Africa has a high number of globally recognized world heritage sites, other parts of Africa may have key sites that are not listed by UNESCO or the Ramsar convention. But he hopes that identifying these world-famous sites might “raise alarm bells for climate risk for heritage in Africa.”

The study notes that its findings will help to prioritize at-risk sites and highlight the need for immediate protective action. This could include engineering solutions, such as sea walls and breakwaters, but Simpson warns that flood mitigation measures like these are “incredibly expensive” and there’s no guarantee they can withstand future sea levels.

A much better solution, he says, is to restore, plant and manage ecological infrastructure, such as salt marshes, seagrass meadows and mangroves, which provide natural protection and act as carbon sinks, sucking up carbon dioxide from the air.

He adds that in Africa especially, it is crucial to improve local and indigenous governance around the sites and to recognize that the lives of indigenous peoples “are part of the landscape and intimately intertwined with the seasons.”