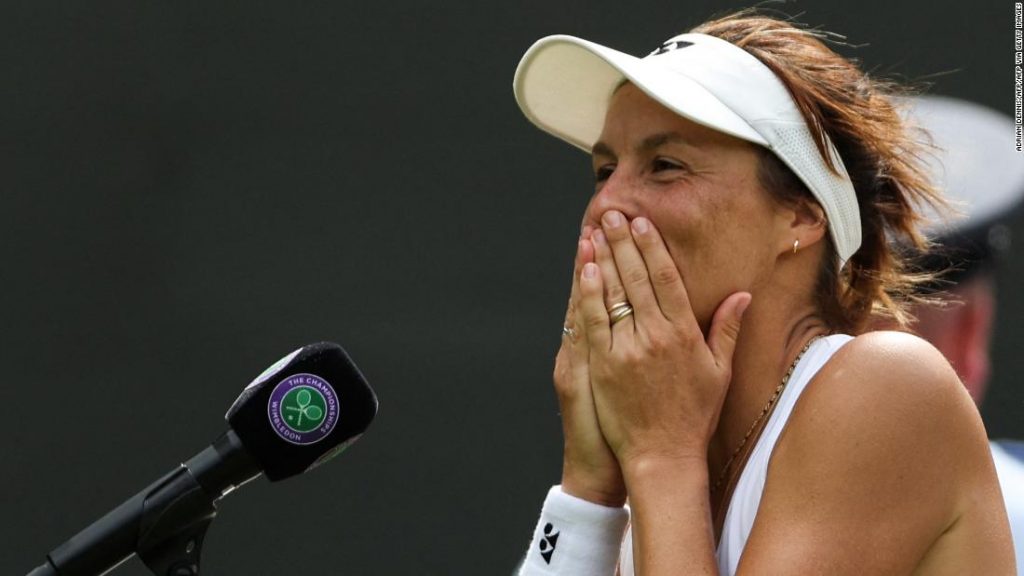 That’s because her eight-year-old daughter, Charlotte, is a budding tennis star who has training each morning. Later in the day, Maria will take to the courts herself, which on Tuesday meant claiming the biggest win of her career and a spot in the Wimbledon semifinals.

With her 4-6 6-2 7-5 victory against fellow German Jule Niemeier, the 34-year-old Maria continued her remarkable run at SW19 — 15 months after the birth of her second daughter, Cecilia.

“It’s a dream,” she said in her on-court interview, “a dream to live this with my family, with my two little girls. I mean, one year ago, I had just given birth.”

Prior to this year’s Wimbledon, Maria had never progressed further than the third round of a grand slam tournament in 34 attempts. It’s no wonder, then, that she admitted to having “goosebumps everywhere” as she soaked up the applause of Court No. 1 — the site of her battling victory on Tuesday.

But as she prepares for her semifinal against Tunisia’s Ons Jabeur, there is little chance Maria will change her daily routines juggling tennis with motherhood.

“I’m in the semifinal of Wimbledon and it’s crazy, but I’m still a mom, and after this, I will go out over there and see my kids and do the same thing I do every single day,” she told reporters.

“I will change Pampers, everything as normal. I try to keep (things) normal as much as possible. That’s what makes me proudest — to be a mom.”

Maria has become the sixth woman in the Open Era to reach the final four of a grand slam after her 34th birthday, following in the footsteps of Venus and Serena Williams, Martina Navratilova, Chris Evert and Billie Jean King.

Her journey getting there hasn’t been straightforward. Four of her five matches at Wimbledon have gone to three sets, and she had to save match points against Jelena Ostapenko in the fourth round.

But Maria has shown that fighting and scrapping on the court is in her nature. She proved that once again against the 22-year-old Niemeier as she bounced back from losing the first set to take the second, then recovered from a break down to win the third.

“It’s a little bit my life to show everybody that I’m still here and I’m a fighter and I keep going and I keep dreaming,” said Maria. “That’s what I want to show my kids.”

Against Niemeier, she frustrated her opponent with slice shots from both the forehand and backhand sides.

She found her rhythm in the second and secured breaks at 2-1 and 5-2, leveling the match with a forehand volley winner after Niemeier had been forced to play a between-the-legs shot from the back of the court.

Niemeier, playing in her second grand slam but ranked six places ahead of Maria as the world No. 97, appeared to take control of the match with a break in the third set, but inconsistency was her undoing.

She ended the contest with 11 double faults — all of which came in the first two sets — and 49 unforced errors to Maria’s 34. However, that did little to detract from what was an entertaining and engrossing match, and the crowd responded with a standing ovation as Maria won her first of two match points in the third set.

READ: What next for Serena Williams after her gutsy, first-round exit at Wimbledon?

Maria tweaked her unorthodox playing style, which involves lots of spin and slices, last year after her coach, husband Charles, suggested switching solely to a one-handed backhand — an unusual change for a player to make so late in their career.

But despite the risk, Maria says it has gone on to be a “super important” shot in her game.

“At the beginning, it’s not so easy because you need confidence, you need to play the shot, you have to gain the confidence in the shot,” she said. “I kept going and it’s getting better and better.”

Change, whether in tennis or life, clearly suits Maria. She won her second WTA title in Bogota, Colombia, in April, and is now enjoying her best ever run at a grand slam.

“One year ago, I gave birth to my second daughter, and if somebody would tell me one year later you are in the semifinal of Wimbledon — that’s crazy,” she said.

Still, she will continue to take Charlotte to practice each morning as her daughter appears to be enjoying the Wimbledon experience as much as her mother.

“Charlotte — she’s happy that she can stay two more days in the crèche,” Maria laughs.

“She realized that it’s something super special, so if I see her after (a match), she’s running into my arms and she’s super proud of me.”