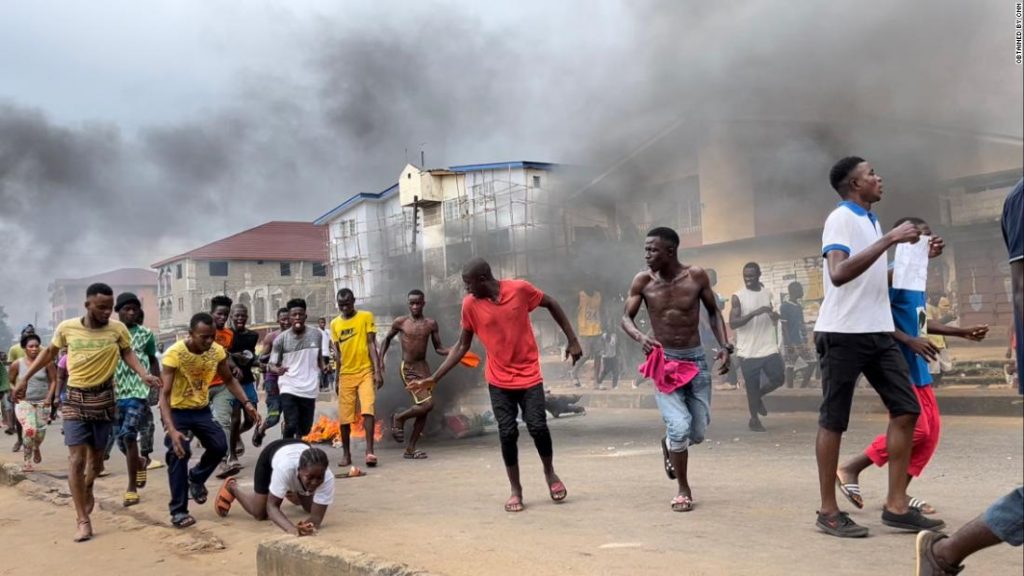 The protests grew violent at times. Graphic images and video of battered and seriously injured protesters and some members of security forces could be seen on social media. Security forces were also seen firing guns at citizens.

CNN has verified the videos were filmed in Sierra Leone at various times on Wednesday.

CNN has not been able yet to verify the number of people injured or killed in the protests. During a televised speech announcing the curfew, Jalloh referred to the protesters and the loss of lives without giving more details.

“These unscrupulous individuals have embarked on a violent and unauthorized protests which has led to the loss of lives of innocent Sierra Leoneans including security personnel,” the Vice President said.

In a tweet, the US Embassy in Freetown appealed for “calm and restraint on all sides.”

‘Not the right way to go about it’

Morris Marah, an entrepreneur from Freetown, told CNN the protests had been brewing for a few days.

“There have been fledgling groups gathering since 8th of August but it escalated and got much worse today. More people joined in huge numbers and there were clashes with police and there was violence on both sides. Some people lost their lives but I don’t know the count,” Marah told CNN in a phone call from Freetown.

“The economic situation in the country is really bad, the government says it is due to Ukraine and coronavirus crisis but to date youth unemployment is very high. There are a lot of disgruntled young people in the country,” he continued. “There was recently a big spike in fuel prices, products and commodities. The President says he doesn’t have quick fixes but, as an entrepreneur, things were hard before Ukraine and the coronavirus crisis.”

“This protests are not supported by everyone in the country. No matter how hard things are. This is not the right way to go about it,” Marah added.

One witness, who asked not to be named for fear of reprisals from the government, said: “The protests started this morning but have been brewing since last week.”

“People are protesting about inflation, hyperinflation and the cost of living. The police are too aggressive when handling issues and it came to the point where the people’s backs were against the wall,” he added.

“Confirmed: Real-time network data show that #SierraLeone is in the midst of a near-total internet shutdown amid anti-government protests in #Freetown; metrics indicate national connectivity at 5% of ordinary levels,” NetBlocks said in a tweet.