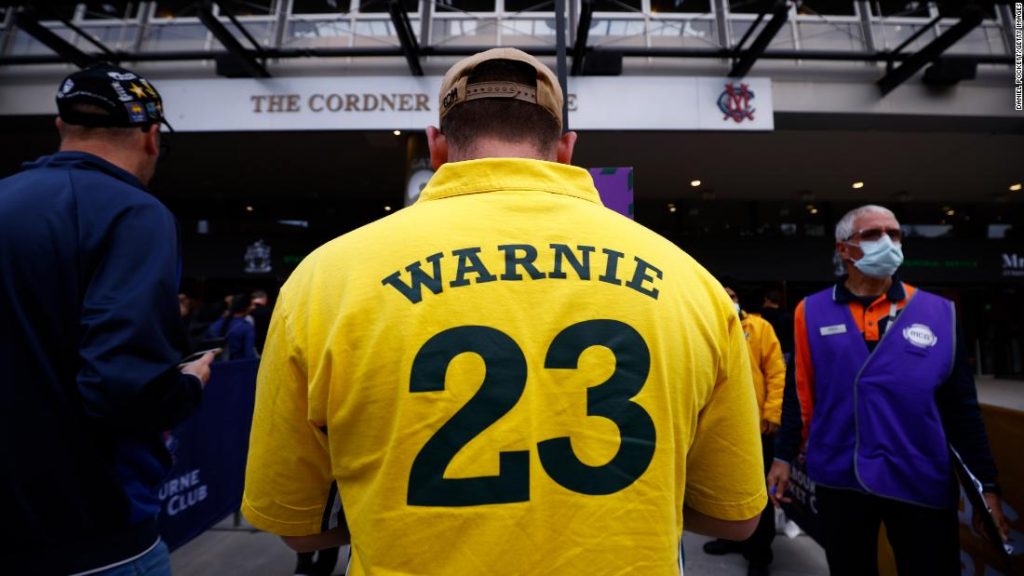 On Wednesday, tens of thousands of fans gathered at the MCG to mark another historic moment, this time to say goodbye to “Spin King” Shane Warne — one of the greatest Australian players ever to take the field — at the state memorial service for the cricket great.
The 52-year-old’s sudden death from a suspected heart attack in Thailand earlier this month sent shockwaves around the world, prompting tributes from family, friends, and household names like Hugh Jackman, Ed Sheeran, and Mick Jagger.

Warne is survived by his three children, daughters Brooke and Summer, and son Jackson, all of whom gave heartfelt speeches Wednesday, amid a sea of blonde wigs and signs paying homage to the cricketer.

Standing on stage at the MCG, Shane’s father Keith spoke first on behalf of the family, describing his son’s passing on March 4 as “the darkest day” of their lives.

Pop star Elton John — a longtime friend of Warne — performed “Don’t Let the Sun Go Down on Me” in honor of the cricket great.

“He was brilliant, he loved to play cricket, and he loved life,” said the Grammy winner.

‘Ball of the century’

Warne, who made his debut for Australia at the age of 22, came of age during an era when fast bowlers were in high demand.

That all changed after Warne’s first Ashes in 1993, when the then 23-year-old bowled England batsman Mike Gatting, with a perfectly pitched leg break that’s been dubbed “the ball of the century.”

Warne’s otherworldly bowling style perplexed his opponents and mesmerized fans, often making the greatest batsmen look foolish as they tried to face down unplayable balls which could spin in any direction.

“I had no delight in playing against Shane,” former England captain Nasser Hussain told the crowd gathered at the MCG, when asked what it was like to come up against the leg spinner.

Although “Warnie” will be remembered first and foremost by the public as a once-in-a-century cricketer, his appeal extended far beyond the sporting field.

He was an Australian cultural export, who embodied an irreverent larrikanism that defined a generation and appealed to people from all walks of life.

“Shane Warne’s legacy transcends cricket and even sport. He’s an Australian cultural icon that was simply one of a kind. His on field performances were as much artistry as they were athletic, and his off field reputation was legendary,” 26-year-old Steven Lustig, who attended the MCG on Wednesday, told CNN.

Warne, who is often described as one of Australia’s “greatest characters,” had a talent for making people fall in love with him, and an openness that allowed fans to feel like they knew him intimately.

“I like loud music, I smoked, I drank, I bowled a bit of leg spin. That’s me,” Warne said in his usual matter-of-fact tone, during a recent documentary about his career.

“When Dad would walk into a room, everyone would light up … his infectious smile and laugh is something I’m going to forever miss,” Warne’s daughter Summer said during her tearful tribute.

The final act of the night was the unveiling of the new Shane Warne Stand at the MCG in memory of the cricketer. As Brooke, Jackson and Summer took their seats in their father’s new stand, Frank Sinatra classic “My Way” played out over the speakers.