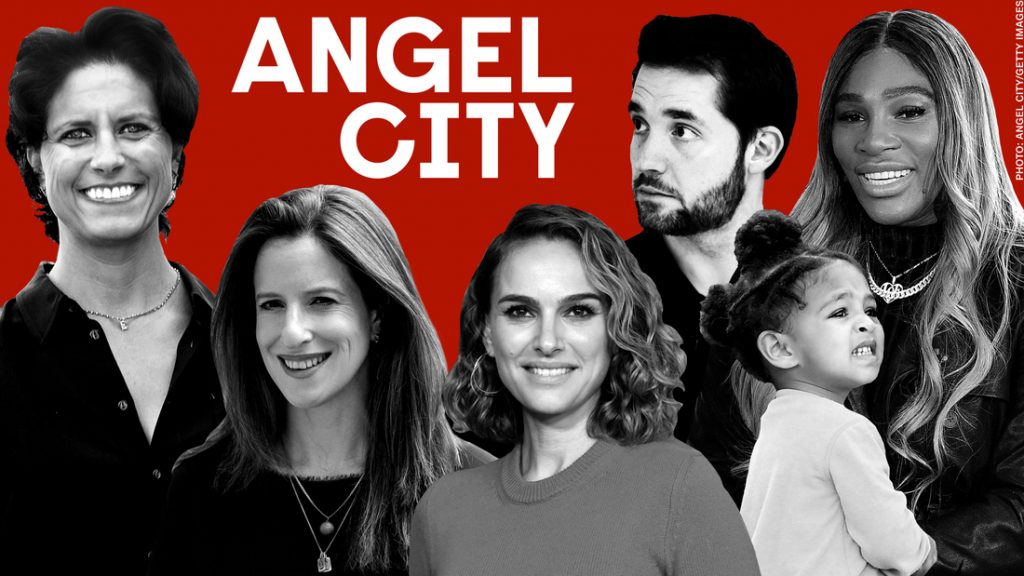 A few days later, he and his wife, the tennis legend Serena Williams, were watching the tournament final on television. Their young daughter Olympia was running around wearing the jersey of one of the team’s star players, Alex Morgan.

Out loud, Ohanian wondered about the possibility of Olympia one day playing the game professionally, but Serena cut him off.

“Without missing a beat, my wife was like, not until they pay her what she’s worth. And she was half joking, but not really.”

In that moment, Ohanian says he felt compelled to try and make a positive contribution to the world of women’s sports, “Alright babe,” he declared, “challenge accepted!”

READ: Megan Rapinoe says ‘we all have a responsibility to make the world a better place’

Twelve months later, ‘Angel City’ has become a reality. Ohanian is a lead investor on a new Los Angeles soccer project led by the Hollywood actress and activist Natalie Portman.

The National Women’s Soccer League was formed in 2013 with just five teams, four have been added since and the league will hit double figures in 2021 when Racing Louisville FC join in. The following season, Angel City will make it 11 teams in the league.

According to Angel City’s President Julie Uhrman, the idea for this new team came during Portman’s involvement with Time’s Up, a movement established in 2018 to combat sexual harassment.

“You can see that she really gets behind causes that are important to her and she does meaningful work for those causes,” Uhrman told CNN Sport, adding: “she wanted to take her commitment to elevate women’s athletics, to address pay equity and to make it public and meaningful.”

Promoting Angel City’s launch in July, Portman spoke about the challenges which have traditionally held back women’s sports. She was talking on Instagram with somebody who’s experienced it first hand for the last 20 years — Williams.

“Our team told me that only 4% of sports coverage is of women’s sport,” Portman said, “it’s insane that we’re here in 2020 and it’s so disproportionate.”

READ: Alexis Ohanian on being married to Serena Williams

Swimming against the tide

The team, which doesn’t have an official name yet — Angel City is only a nickname — and they won’t play until 2022. But already it’s clear that those behind the club are doing things differently.

For one, the founding investors are almost exclusively women, “I think you can count the number of clubs that are mainly owned by women on one hand and probably with only a couple of fingers,” Uhrman told CNN, “I mean, it’s very unusual.”

Listed on the club’s website are the 31 founding investors and only four are men; Alexis Ohanian is one of those odd-men out.

He described an early meeting with Uhrman, Portman and venture capitalist Kara Nortman, “the three of them sat down and said, ‘this is what we want to build, this is how we want to build it,’ and it was really important to them from day one to have a majority women-owned team.

“I think we can talk about so many of the disparities in professional sports. And I think one of the ways we get real change is not just proving that this is an amazing business that will generate lots of money and lots of attention and lots of success, but it’s also showing that every bit of how this organization is run can be different and be as, if not more successful as a result.

“And not because it feels good, although it does feel good, but because it’s preposterous that it is not more normal.”

The club knows that they are trying to swim against the tide, and not just because they’re hoping to change the perception of professional women’s sport; they’re also launching a club in a Los Angeles sports market that is already saturated.

READ: Natalie Portman and Serena Williams are among investors behind Angel City

Uhrman rattles off the clubs that they’ll soon be rubbing shoulders with in a city famed for congestion, “Los Angeles is a market where there is already nine professional sports teams and [collegiate] powerhouses like University of Southern California and University of California, Los Angeles.

So even the idea of bringing another professional sports team here, the third soccer club here, is an ambitious, big idea.”

But Angel City believes that their novel approach will cut through the noise, establishing a local, community, club with global appeal. “We know women’s soccer has been incredibly successful during the Olympics and World Cup,” Uhrman says,

“The question is, why is it every four years that they garner such attention? And I think the answer is because of exposure and awareness.”

Behind the key investors is a supporting cast of Hollywood stars, including Jennifer Garner, Eva Longoria and Jessica Chastain, plus Serena Williams and 14 former players on the US women’s national team; it’s a group of women with tens of millions of followers on social media; they’re going to use their collective platforms to shout it from the rooftops.

Ohanian says the focus will be on social media storytelling to build the brand and it already seems to be working, “tens of thousands of folks are very excited, [we’ve] sold out merchandise for a team that doesn’t exist yet.”

He compares women’s soccer to e-sports, which drew a rush of investment five years ago, and has concluded that the market has massively undervalued female soccer.

“These are clubs of gamers, young men who draw hundreds of millions of fans all over the world. [But] the average American does not know who the best League of Legends player is, whereas Megan Rapinoe and Alex Morgan are already cultural icons.

“From a marketing standpoint, no offense to e-sports, they’re far more marketable for brands who want to be aligned with consumer spending in this country.”

In her conversation with Williams on Instagram, Portman remarked that already, Angel City has changed the conversation, “people are starting to think about how to do this in other sports too.”

Women are standing up for and elevating other women; the sisters are doing it for themselves. It’s an LA Story that could have a Hollywood ending and it’s a potential game-changer for women’s sports everywhere.