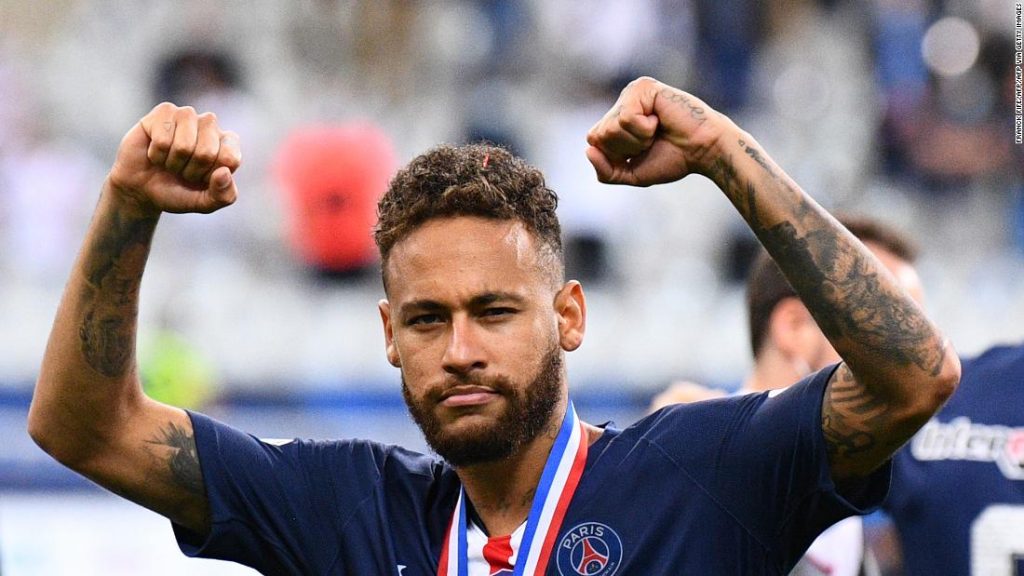 Yet when it comes to the bright lights of European football’s biggest stage — the Champions League — he’s trapped in a perpetual cycle of repetition.
A one-time winner, yes — but for some ably assisted by his supremely skilled South American counterparts — Lionel Messi and Luis Suarez — in the once famed ‘MSN’ triumvirate at Barcelona.
On two occasions misfortune has conspired to subvert the Brazilian prodigy’s chances of grabbing the competition by the scruff of the neck in the red and blue colors of Paris Saint-Germain.

So here we are in 2020. Is it third time lucky? Is this Neymar’s moment of truth?

Three games now stand between the ‘Red Pill’ of European enlightenment or the ‘Blue Pill’ of another footnote in the 28-year-old’s lengthening Wikipedia page.

“This is the year that he can really redeem himself […] These three games can change everything […] I don’t believe he’s going to have another opportunity like this one,” Brazilian football journalist Fernando Kallás tells CNN Sport.

‘Biggest mistake in the history of sports’

Since planting their flag in the cobbled Parisians streets in June 2011, PSG’s Qatari investors have made no secret of their ultimate goal — continental supremacy.

But if Europe is a combination lock, they’ve been interminably searching for the locksmith with the elusive key. Seven times they’ve tried and failed to crack the complex code — each failure more painful and bitter than the last.

“A specific timeline was set and once you get past that timeline each season it goes on it seems like PSG are getting further and further away so there’s a weight of history that’s bearing down,” explains French football expert Jonathan Johnson.

The world record signing of Neymar from Barcelona in August 2017 — for a still mind-bending $263 million — was intended to deliver that knight in shining armor.

No longer the back-up singer to Messi and Suarez but now the leading performer with a license to thrill and become the best in the world.

For some it was a game-changer; for Kallás it remains “the biggest mistake in the history of sports.”

Reflecting this past week on the three-year anniversary of his move, the striker wrote that “(these) came with a lot of knowledge. I’ve lived times of joy and some complicated ones.”

His bond with supporters in the city of love has undulated its way through the full gamut of Facebook relationship statuses: From ‘Married’ to ‘Separated’ to ‘It’s complicated.’

All with the allure of a former lover in Catalonia lingering in the background.

A long drawn-out, but ultimately unsuccessful, serenade last summer to woo the Brazilian back to the Camp Nou brought simmering tensions in Paris to the boil.

The love-hate dynamic around the polarizing figure was perhaps best encapsulated in the superstar’s first league appearance of the 2019-20 season.

Relentlessly booed for 90 minutes before delivering a sublime match-winning bicycle kick at the very death — half the naysayers enraptured; the other half enraged.

Kallás paints a picture of jury similarly split down the middle along generational lines in Brazil — the young pretenders who adore “the image, the smile, the tattoos” contrasted with the old guard who are “really concerned about him.”

The Cold War in Paris has since thawed, along with the realization that going back to the future is — for now — not an imminent prospect.

“He has shown on the pitch and off it that he’s committed to the project […] He really has to embrace the challenge of being a PSG player and achieving something, notably in the Champions League, in Paris,” says Johnson.

Whilst a new leaf may have been turned on the pitch, questions remain off it.

Will the boy become a man?

Neymar’s personal life has — at times — borne the hallmarks of a gripping telenovela — filled with intrigue, and all supported by an ensembled entourage.

Last year he was cleared of wrongdoing after a Brazilian model accused the former Brazil captain of rape and assault.
This year he was forced to miss a league match through injury — two days after hosting a lavish birthday party in a Paris nightclub.

Those willing him on to succeed despair: Will the boy ever become a man?

“In Brazil we have an expression that says that he (Neymar) is an endless promise […] That he is “Menino Neymar” (“Baby Neymar”) — He’s not a boy […] He needs to be in reality […] He has to grow up,” says Kallás, who has followed the Brazilian’s trials and tribulations on and off the pitch.

“When he’s on the pitch he delivers […] I have never, never heard one complaint from a coach or another player about his attitude in training, in the locker-room.”

And for all the goals, assists and silverware to date, history and biology have dealt the twinkle-toed star a cruel hand — starving him of the opportunity to have his say at the business end of European football’s elite club competition.

Curtailed seasons in 2018 and 2019 due to injuries coincided with dramatic exists for PSG from the round of 16 stage at the hands of Real Madrid and Manchester United, respectively.

“That’s what makes the remainder of this campaign so important and why he’ll be under such close scrutiny,” says Johnson.

The Covid-19 pandemic has significantly — and perhaps favorably for PSG — changed the dynamic for the finale of this year’s tournament.

Gone are the two-legged knockout affairs from the quarterfinal stages onwards, replaced instead by single-leg shoot outs — all within the bubble of Lisbon.

Without the departed sharpshooter Edinson Cavani and the recently sidelined Kylian Mbappé, the floor is Neymar’s.
First the surprise package of Atalanta awaits in the quarterfinals; Then a potential clash with the battle hardened Atlético Madrid in the semifinals and, after that, who knows in a winner-takes-all final.

Whilst progress in the competition would — according to Johnson — “really give the (Qatari) project the shot in the arm that it’s needed after a few years of massive disappointment,” for Kallás, this month could be the beginning of a career defining two years for the individual at the heart of the narrative.

With the Brazilian’s contract set to expire in 2022 and a World Cup in Qatar that same year, which is likely to be his last in a Brazil jersey, it’s quite simply “make or break.”

The telenovela has had its unforeseen plot twists, its moments of madness and its bursts of brilliance. Now it’s in the hands of its lead protagonist to script its showpiece ending.