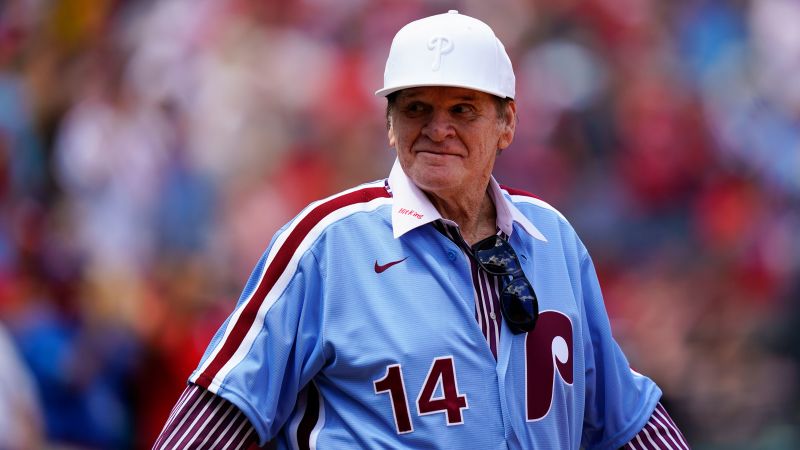 Major League Baseball’s all-time hits leader Pete Rose returned to the field in Philadelphia for the first time since receiving a lifetime ban from baseball in 1989.

On Sunday, the 81-year-old was a part of the celebration of the 1980 Philadelphia Phillies World Series championship team at Citizens Bank Park where he received a standing ovation.

The Phillies planned on honoring Rose in 2017 but chose not to after a woman alleged that he had sex with her when she was less than 16 years old.

Before the game, Rose was asked by Philadelphia Inquirer writer Alex Coffey about the 2017 sexual assault allegations and whether his presence at the ballpark sends a negative message to women.

Another reporter asked Rose again about the 2017 story and how it may affect how fans and women view him when he was made available to the media.

The alleged assault was part of a defamation lawsuit brought by Rose against the attorney who investigated him on behalf of Major League Baseball for betting on baseball in the 1980s.

Rose filed a defamation lawsuit against attorney John Dowd in 2017 for alleging that Rose had sex with underage girls.

In court documents, Rose admitted that he had sex with the female but claimed that he did not do so until 1975, when she was 16 years old, and he was playing for the Cincinnati Reds. The suit would later be dismissed after both sides reached an agreement. In Ohio, 16 years of age is considered the age of consent.

Coffey later wrote in her news story: “Rose was made available after the ceremony. Someone, maybe an agent, said he had something to say to me, but he didn’t seem to know he was expected to say anything. He asked if he’d offended me, and said ‘will you forgive me if I sign 1000 baseballs for you’ before saying ‘sorry.’”

In a statement last month, the Phillies explained why Rose was invited for the festivities.

“In planning the 1980 reunion, we consulted with Pete’s teammates about his inclusion. Everyone wants Pete to be part of the festivities since there would be no trophy in 1980 without him. In addition, the club received permission from the Commissioner’s Office to invite Pete as a member of the championship team.”

Rose was banned from baseball in 1989 for betting on Reds games while he was a player/manager for the team. He has been declared ineligible for election to baseball’s hall of fame.

For years, Rose denied betting on baseball and wagering on his own team. In 2004, he admitted in his autobiography that he bet on baseball while Reds manager. Three years later, he told ESPN Radio that he bet on the Reds to win every night.