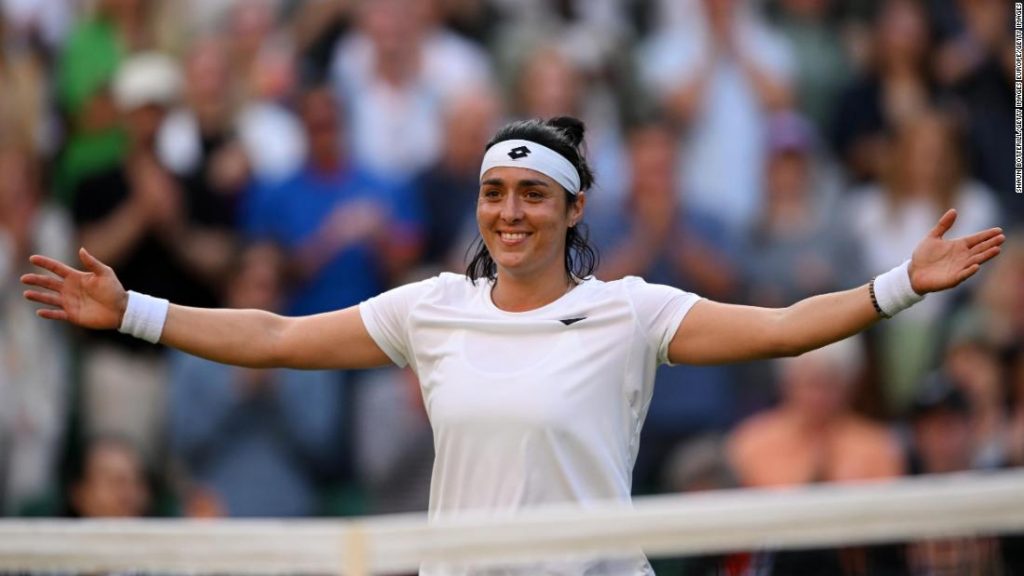 This Saturday will be no different as Jabeur attempts to become the first Tunisian, first Arab and first African woman to win a grand slam in the Open Era.

Jabeur, 27, has been a trailblazer for her region long before reaching Saturday’s final. Last year, she became the first Arab player to win a WTA title and break into the top 10 in the singles rankings.

Victory on Saturday, however, would be the greatest achievement of her career.

“I did a lot of times imagine myself giving the speech, holding the (Wimbledon) trophy, seeing the trophy,” Jabeur said.

“I did all of it. Now, I need really to hold the trophy. That’s the only thing left for me. But I believe in that. I know I can do it.”

Jabeur has enjoyed a steep rise through the world rankings over the past few years, breaking into the top 50 for the first time in 2020.

She won her first of three WTA events last year and claimed her next two — in Madrid and Berlin — earlier this season, propelling her to an all-time high of second in the world.

Her success on the court — coupled with her friendly, easygoing demeanor off it — have seen her become a hugely popular figure back home in Tunisia, where she has earned the nickname “Minister of Happiness.”

“It’s tough times in Tunisia sometimes,” said Jabeur. “When they see my matches, (they) always say sports unites people. I’m happy they follow me. They’re pushing me to do better. Hopefully, I can keep the title forever.”

READ: Nadal withdraws from Wimbledon due to injury
Jabeur has only dropped two sets so far at this year’s Wimbledon — against Marie Bouzkova in the quarterfinals and Tatjana Maria in the semifinals.

The tall, big-serving Rybakina, however, has lost just one set and is likely to be Jabeur’s toughest opponent so far having dismantled 2019 Wimbledon champion Simona Halep in her semifinal on Thursday.

No matter who wins, history will be made because when the two meet on Centre Court, a first-time Wimbledon winner will be crowned and either Tunisia or Kazakhstan will celebrate their first grand slam singles champion.

Rybakina, born and raised in Moscow, changed allegiances from Russia to Kazakhstan four years ago — a switch that seems particularly pertinent at this year’s tournament given the decision by Wimbledon organizers to exclude Russian and Belarusian players amid the ongoing war in Ukraine.

“I’m playing already for Kazakhstan for a long time,” Rybakina told reporters on Thursday when asked about her nationality.

“I’m really happy representing Kazakhstan. They believed in me. There is no more question about how I feel. It’s just already a long time, my journey as a Kazakh player: I played at the Olympics, Fed Cup.”

Like Jabeur, Rybakina is enjoying the best grand slam tournament of her career, having never previously progressed beyond the quarterfinals.

The two players have faced each other three times before with Jabeur winning twice, including their most recent meeting in Chicago last year.

Saturday’s final will showcase contrasting styles: Jabeur brings an entertaining array of shots to her game, deploying slice and drop shots to good effect, while Rybakina brings power — from the baseline as well as with her serve.

READ: Three Wimbledon security guards arrested for alleged fight amongst each other

The 23-year-old has hit 49 aces so far this tournament — 19 more than any other player — and has registered the second-fastest serve in the women’s draw at 122 miles per hour.

Jabeur is well aware of the challenges her opponent will pose.

“She serves really well, so my main goal is to return as many balls as I can, to make her really work hard to win the point,” Jabeur said.

“I’ve played her a couple of times. I know she can hit really hard and hit a lot of winners. I know that my game could really bother her. I really try to focus more on myself, do a lot of slices, try to really make her work hard.”

But for the so-called “Minister of Happiness,” Saturday’s match will also be about enjoying the occasion — a moment Jabeur previously thought she’d never get to experience in her career.

“Overall, I try to enjoy playing tennis because it’s tough to do it sometimes when you play every week, when maybe you lose every week. It’s really tough.

“But for me, I had to remind myself why I started playing tennis, what kind of joy tennis brings to me. As soon as I remind myself that, I get pumped, motivated to go, and play my next matches.”