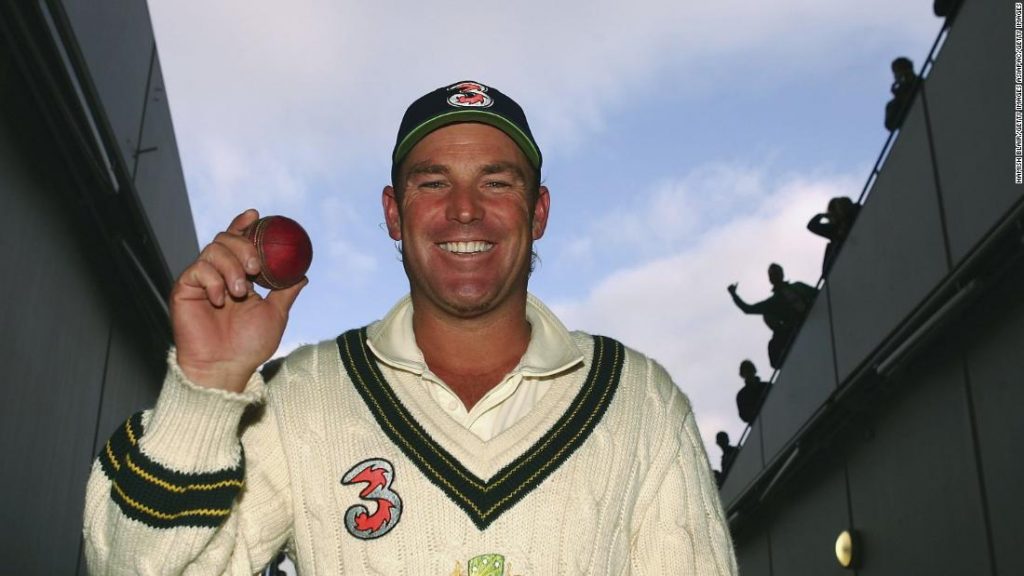 The Australian cricket great died at the age of 52 from a suspected heart attack on Friday, according to a statement from his management team.

Warne took over 1,000 international wickets, including 708 Test wickets — second only to Sri Lanka’s Muttiah Muralitharan — during his illustrious career and retired from cricket in 2013 as one of the greatest to ever play the sport.

He was a leading figure of the dominant Australian side of the late 1990s and early 2000s, winning multiple Ashes series and the World Cup in 1999.

Allied to his dominance with the ball was his charismatic personality, which transformed Warne from cricket star to global sporting superstar.

“Warnie was an all time great, a once in a century type cricketer, and his records will live on forever,” said current Australia captain Pat Cummins, dubbing Warne “King” in his statement.

“We all grew up watching Warnie, idolising him, we all had posters on his wall, had his earrings. What we loved so much about Warnie was his showmanship, his charisma, his tactics, the way he willed himself and the team around him to will teams around him to win games for Australia, and above all else his incredible skills as a leg-spinner.

“There’s so many guys in this team and squad who still hold him as a hero … all-time favorite player. The game was never the same after Warnie emerged and the game will never be the same after his passing.

Ball of the century

Warne wasn’t just a bowler capable of dominating matches almost single handedly, he was also an entertainer, happy to engage in banter with England fans and often the subject of tabloid headlines.

If his first year as an international player gave a few indications that he was destined for success, a single ball he bowled in Manchester in 1993 completely changed perceptions about the bowler.

Just a year after making his international debut in 1992, Warne was playing in his first Ashes series in England.

Adorned with his short, bright blonde hair and wielding his now famous right-arm bowling action, Warne produced a bamboozling delivery in what has been dubbed the “ball of the century.”

The delivery looked to be heading past England batter Mike Gatting’s leg stump. Then it bounced on the pitch, spun dramatically and missed Gatting’s bat before astonishingly hitting the off-stump.

Like many others, Gatting looked astounded that such an initially harmless-looking delivery had cost him his wicket — former England player Graham Gooch said: “He looked as though someone had just nicked his lunch.”

Warne’s ability to flight and spin the ball to such devastating effect helped revive leg-spin from a forgotten art into a key component in modern day cricket.

“The highlight of my cricketing career was to keep wicket to Warnie,” Adam Gilchrist, Australia’s legendary wicketkeeper and Warne’s longtime teammate, wrote on Twitter.

“Best seat in the house to watch the maestro at work. Have often felt a tad selfish, that Heals and I pretty much exclusively are the only ones who had that thrill and pleasure at Test level. Rip Warnie.

Other cricket greats were quick to pay tribute to Warne’s remarkable talent.

Former India international batter Virender Sehwag said on Twitter: “One of the greatest spinners, the man who made spin cool, superstar Shane Warne is no more.

“Life is very fragile, but this is very difficult to fathom. My heartfelt condolences to his family, friends and fans all around the world.”

‘I am shocked to the core’

During his career which spanned over 20 years, Warne won numerous trophies and accolades.

In Australia’s victorious World Cup team in 1999, Warne collected the man of the match award in the final. He was named one of Wisden’s five best players of the 20th century, as well as being selected in an all-time Test World XI by Wisden to commemorate 150 years of the cricketers’ almanack.

Away from international cricket, Warne also played a pivotal role in making the Indian Premier League (IPL) the behemoth it is today.

In 2008, he led the Rajasthan Royals to the inaugural IPL title, something he believes gave the tournament “credibility because the underdog came good.”

“To then go and win it in the style we did, that put the IPL on the map. Any underdog story like that — you look at Leicester City, what they did. It’s a pretty amazing story,” Warne told CNN in 2019, referring to the soccer underdog’s remarkable Premier League title triumph in 2016.

“I was very lucky to play in an era of Australian cricket where we were super successful. We beat every team home and away, won World Cups, Ashes series, so we had some huge results.

“To be part of all of that with the Aussies and do those things was great but the IPL, it was completely different.”

Warne played his entire domestic cricket career in Australia with his native Victoria, but had stints with Hampshire in England.

“Absolutely shocked and gutted to hear about Shane Warne, wrote former Sri Lanka captain Kumar Sangakkara. “Legend and friend. Just can’t believe it.”
Former West Indies batter Vivian Richards also said on Twitter: “Unbelievable. I am shocked to the core. This can’t be true… Rest In Peace, Shane Warne. There are no words to describe what I feel right now. A huge loss for cricket.”