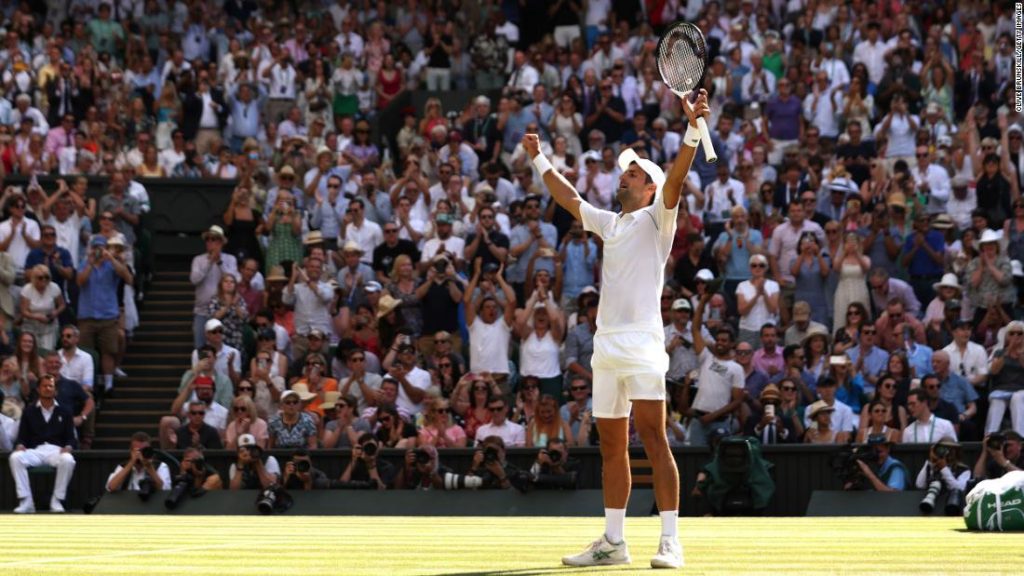 The Serbian won his 21st grand slam title on Sunday, beating Nick Kyrgios in the final to win yet another Wimbledon trophy, the seventh time he’s done so and his fourth at SW19 in a row.

However, as it stands, Djokovic’s immediate future remains unclear. As a result of his anti-Covid-19 vaccination stance, his current participation in upcoming grand slams in the US and in Australia has been thrown into question.

‘I just needed time to weather the storm’

Djokovic has endured a rocky couple of months off the court and that seeped into his play on it.

In January, Djokovic was eventually deported from Australia following a prolonged saga, including time in detention, preventing his participation in the Australian Open due to his refusal to get vaccinated for Covid-19.

Under Australian law, Djokovic could be banned from the country for three years due to the circumstances surrounding his deportation, though Home Affairs Minister Karen Andrews didn’t rule out an exemption. “Any application will be reviewed on its merits,” she said in January.

Although he has returned to action slowly but surely, the former world No. 1 said that he had to “weather a storm” during that time.

“The first months of this year affected me,” he said after his Wimbledon victory. “Mentally and emotionally, I was not in a good place. I felt so much pressure.

“That caused turbulence inside of me. I just needed time to weather the storm. At one point, I realized it’s just going to take time, and that’s it, time for me to regroup, to get into optimal balanced state on the court, off the court.”

“This was a huge thing what happened to him. We all expected from him after couple of weeks, ‘Okay, forget about Australia, let’s go back and practice. It’s not happening like this,'” Ivanisevic said.

“It took a long time, Monte-Carlo, Belgrade, then he started to play better, Madrid, Rome. Even he played well in Paris, but Rafa (Nadal) was better player that night.

“For some people, they don’t recover. They will never play tennis. This was a big shock. Was shock for me, and I was there. I was free. Imagine for him.

“Unbelievable how he recover and how he got through that. It’s really for me heroic because it was not easy to digest all the thing and come back to play tennis. Then you’re thinking: ‘Why (do) you have to play tennis?'”

Despite his return to action in selected tournaments, his Covid-19 vaccination stance has restricted his participation in others.

He has missed tournaments in the US throughout this year, such as Indian Wells or the Miami Open, because any non-US citizen must be fully vaccinated against Covid-19 in order to receive a visa and enter the country.

And, as it stands, he would not be permitted to play in the US Open — which is set to begin on August 29 — as he has not been vaccinated.

Djokovic didn’t sound particularly optimistic about competing at Flushing Meadows given the current state of affairs — although he did say he would “really love” to play there.

“I’m not vaccinated and I’m not planning to get vaccinated, so the only good news I can have is them removing the mandated green vaccine card or whatever you call it to enter United States or exemption,” he said.

“I don’t think exemption is realistically possible. If that is possibility, I don’t know what exemption would be about. I don’t know. I don’t have much answers there. I think it’s just whether or not they remove this in time for me to get to USA.”

In fact, due to current Australian immigration laws, the 35-year-old wouldn’t be permitted to play in the 2023 Australian Open either.

That could mean that Djokovic — one of the greatest to ever grace the sport of tennis — would next take to the court in a grand slam in May 2023 at next year’s French Open.

He remains one grand slam title behind the all-time record of 21 by Nadal and, giving some insight into what he sees in his future, prioritizing the biggest events will be his primary focus.

“To be honest, I doubt that I’ll go and chase points,” he explained. “As I understand from my agent today, winning grand slam would qualify you for World Tour Finals unless you’re out of top 20, which I don’t know. With accumulated points so far, I guess I’ll make top 20.

“I guess I have a good chance to be already in the Finals. I will not burden myself to really have to go and play tournaments and get points.

“I don’t really feel any pressure or necessity to play a certain schedule. And things have changed in the last year, year and a half for me. I achieved that historic No. 1, weeks for No. 1, that I worked for all my life. Now that that’s done and dusted, I prioritize slams and big tournaments really and where I want to play, where I feel good.

He added: “Could be Laver Cup, Davis Cup is coming as well. I love playing for my country. Going to try to be part of that. Next thing you know, the season is over, right? Those are the big, let’s say, tournaments that I have right now in my mind.”