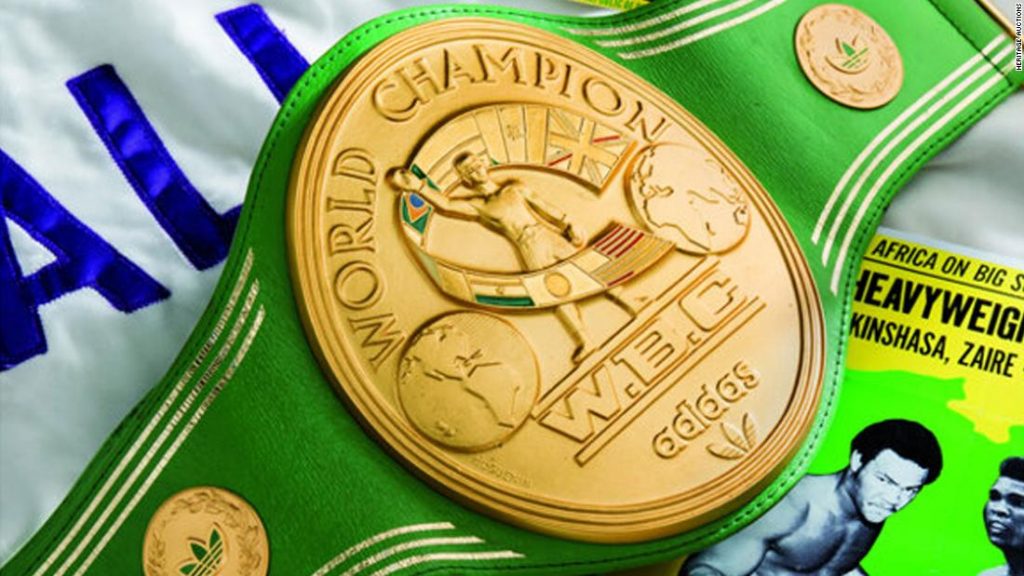 The NFL team owner confirmed on Twitter that he had added the belt to his collection. “Proud to be the steward!” he said.
Ali won the WBC heavyweight championship belt in 1974 with victory over George Foreman in Kinshasa, Zaire (now the Democratic Republic of Congo), where he employed his rope-a-dope tactic for the first time.

The fight marked Ali’s return to competitive boxing after he was stripped of his boxing license and his World Boxing Association title for refusing induction into the US Armed Forces to fight in Vietnam seven years earlier.

The belt first entered the public domain in 1988 when the contents of Ali’s late boxing coach Drew “Bundini” Brown’s storage lockers were sold at auction.

It is one of two WBC belts belonging to Ali after the fight that are known to exist; the other remains in a private collection.

And it is the highest price fetched by a sports collectible sold at Heritage Auctions.

“After several hours of watching two bidders go back and forth over this belt, this proved to be a battle worthy of the Rumble itself,” Chris Ivy, Heritage’s Director of Sports Auctions, said in a press release.

“We’re just thrilled this extraordinary piece of boxing history — of sports history, of cultural history — found such an exceptional caretaker who will now share it with the rest of the world.”

Irsay already owns several other pieces from Ali’s career, including the 1965 walkout robe that first bore the name Muhammad Ali and his shoes from the 1975 ‘Thrilla in Manila’ fight against Joe Frazier.

The Colts owner has spent millions assembling his collection, which features memorabilia from the worlds of sport, music, literature and politics.

He is displaying this collection, complete with its new addition, to the public on August 2 in Chicago and on September 9 in Indianapolis.