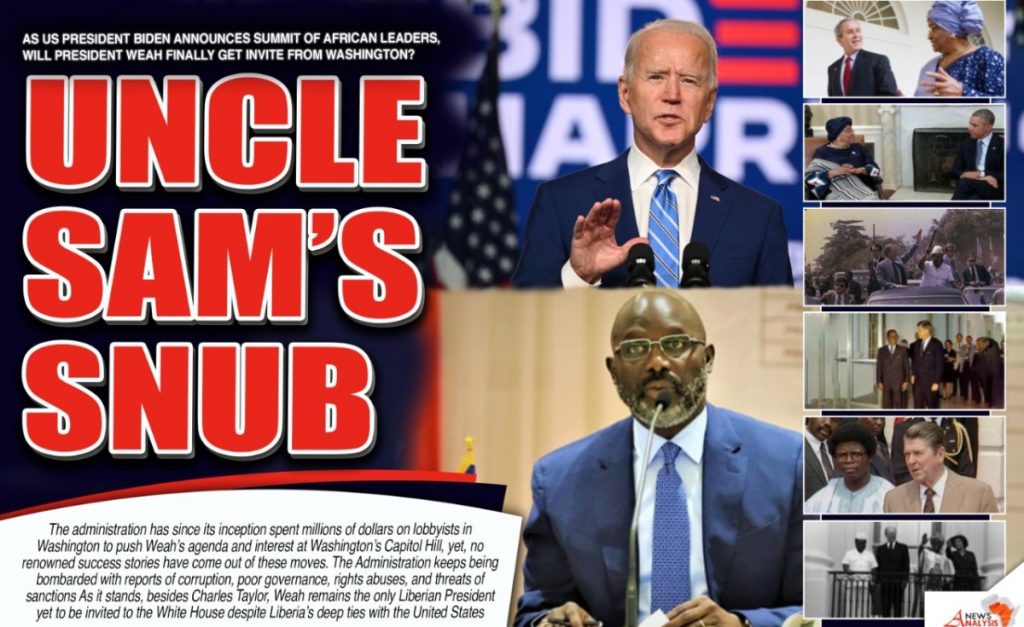 Monrovia — History has it registered that all Presidents of Liberia, except for Charles Taylor, who was neck deep in the civil war, visited the White House in a bid to further cement the Liberian-American relationship, but it, however, seems the Weah administration is changing the course of history having gone five years into the Presidency without any official visit to the White House.

This has led many to believe that there is a strain on the relationship between the Weah-led government and the United States. This belief stems from the fact that Weah’s predecessor, Madam Ellen Johnson Sirleaf, during her administration was invited to the White House on three occasions during her 12-year rule and in one instance, she addressed Joint Congress.

On Wednesday, U.S. President Joe Biden announced that he will welcome African leaders to Washington in December in a bid to “demonstrate the United States’ enduring commitment to Africa.”

The U.S-Africa Leaders Summit will build on our shared values to better foster new economic engagement,” Biden said in a statement.

The meeting will also “reinforce the U.S-Africa commitment to democracy and human rights” and tackle COVID-19 and future pandemics as well as climate change and food security, Biden said.

This could be Pres. Weah’s easiest way to the White House but there has so far been no indication that Pres. Weah is on the list of invitees for the summit despite the 158 years of diplomatic relations between the two countries.

The United States established diplomatic relations with Liberia in 1864; 17 years after it declared independence from the American Colonization Society, an organization that resettled free African-Americans and freed slaves in Liberia.

The Sirleaf administration was often criticized at the time for lavishing money on lobbyists in Washington. However, the outcomes were vivid.

KRL was the company of record for the two terms of President Sirleaf and led the global advocacy push during the Ebola crisis in Liberia in 2014, where the United States approved an amount of US$500 million in urgent supplemental appropriations and deployed the 101st Airborne to Liberia to assist in building a logistical bridge to fight Ebola.

During the early days of the Weah Administration, KRL announced that it signed up a one-year agreement to support President Weah and his administration’s Pro-Poor Agenda for Prosperity and Development (PAPD).

According to the KRL statement in January 2020 the one-year agreement included increasing donor support and foreign direct investment in critical economic sectors of Liberia.

However, the administration discontinued the contract with KRL.

Diplomatic observers say one of the early missteps of the government was to do away with former Sirleaf lobbyist, Riva Levinson.

The administration was reportedly advised to hold Levinson on for two years at least,

but that was not considered by the regime.

The Weah-led government has hired at least four lobbyists in the past five years, the recent being a US$75,000 monthly contract with Ballard Partners Inc. which was signed on June 24, 2022.

The monthly fee excludes travels, meals, hotels, and other expenses that may be incurred by Ballard Partners.

Their job would be “to consult with the client [the Government of Liberia] and advocate on its behalf those issues the client deems necessary and appropriate before the US Federal government, issues, and objectives may include but are not limited to, enhancing US-Government of Liberia bilateral relations, developing trade, investment, and business opportunities. It shall further be the Firm’s duty to inform the Client of developments in legislation and policy relevant to the Client’s issues and objectives.”

In 2021, the government appointed Liberal CNN Analyst Bakari Sellers as a lobbyist in Washington to improve the country’s image that has been tarred by recurring reports on human rights abuses and corruption.

He was tasked to arrange high-level interactions with the US government and build a “positive and correct image” of the George Weah-led government among the US policymakers.

Politico which broke the news at the time said Jake Menges would be paid $25,000 a month.

His job was also to “offer business development and government affairs advice” to Liberia’s government, including “representation before the leaders of the House and Senate as well as representatives in the Department of Commerce, Transportation, Treasury, Agriculture, and Energy,” according to a contract filed with the Justice Department.

Despite these high-profile representations in Washington, the Weah administration has continued to suffer lashes when it comes to the fight against corruption, ending the culture of impunity and good governance.

Ms. Dana Banks, head of U.S. President Joe Biden’s delegation to Liberia’s Bicentennial Celebration in February lamented that the Liberian government continues to underfund integrity institutions while at the same time exerting its influence on these anti-graft bodies, yet expecting the United States and the international community to provide the needs of the country while corruption remains their hallmark.

Ms. Banks is also a Special Assistant to President Biden and the Senior Director for African Affairs at the Security Council.

Banks: “Liberia has a host of anti-corruption institutions. But while these institutions are nominally and legally independent from the Government of Liberia, the truth is that the government fails to adequately fund them and exerts its influence upon them.

“Too many of Liberia’s leaders have chosen their own personal short-term gain over the long-term benefit of their country.

“The expectation, sometimes, is that the United States and the rest of the international community will step in to solve Liberia’s long-term problems.

So let me be clear. The United States is a proud and dedicated partner and friend of Liberia.

“But ultimately, only the Liberian Government and the Liberian people can tackle corruption, fight for accountability and transparency, and move this country forward.

The United States has been particular about the fight against corruption since the inception of the Biden Administration and has since 2019 instituted two sanctions on influential Liberian politicians – Cllr. Varney Sherman, Senator of Grand Cape Mount County and Senator Prince Y. Johnson of Nimba County.

Currently, the U.S. House of Representatives is deliberating a Resolution proffered by Representative Gregory Meeks that seeks to give the U.S. State Department the green light to impose more sanctions on individuals in Liberia who continue to act of corruption and acts that undermine the country’s democracy.

Transparency International’s 2021 Corruption Perception Index (CPI) ranked Liberia among the poor-performing countries in the fight against corruption. Out of 180 countries captured, Liberia ranked 136, with a score of 29, climbing just one step above the 2020 ranking of 28.

The CPI ranks 180 countries and territories by their perceived levels of public sector corruption on a scale of zero (highly corrupt) to 100 (very clean).