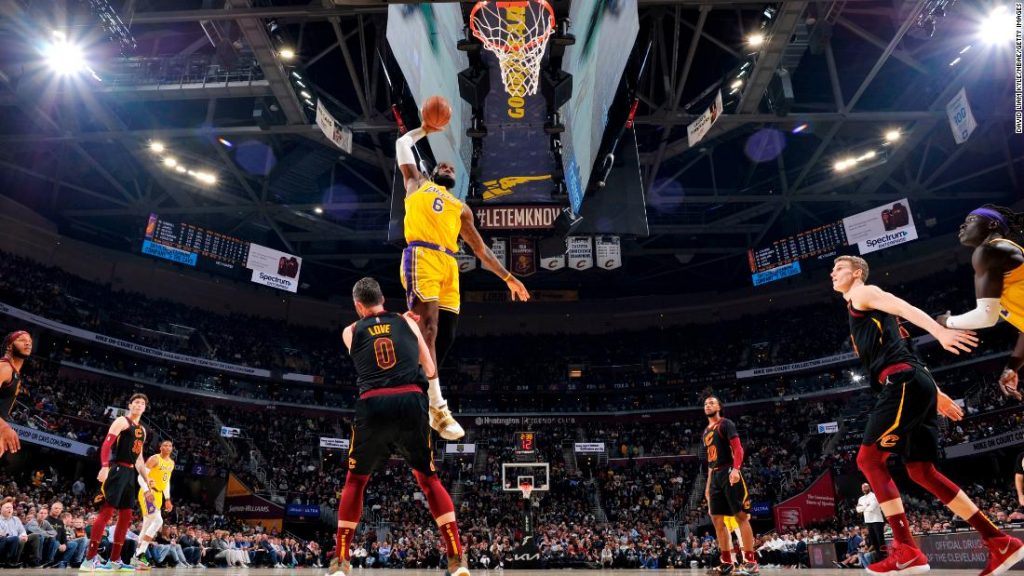 A three-time MVP with the Cavaliers, the 37-year-old received a warm welcome from his former fans before racking up a 38 point triple-double to lift his Los Angeles Lakers to a much-needed 131-120 victory on the road.

It was James‘ second straight 38-point haul, having scored the same tally in a defeat to the Washington Wizards on Sunday to leapfrog Karl Malone into second on the NBA’s all-time regular season scoring list behind Kareem Abdul-Jabbar.
James added 11 rebounds and 12 assists against the Cavs to become the oldest ever player to notch a 30-point triple double, according to StatMuse.

Despite leading a Lakers team struggling for consistency at 31-41 for the season, with 29.8 points per game, James tops the league alongside Joel Embiid and Giannis Antetokounmpo, nine and 10 years his junior respectively.

“LeBron James putting up numbers on these young boys at the age of 37 years old is crazy to me,” tweeted analyst and former Cavs center Kendrick Perkins.

“This man has literally dominated two generations. Low key these young boys should feel disrespected by the old man! Carry the hell on,” Perkins added.

Last month, James admitted the “door’s not closed” on a third stint at the team with which he began his NBA career.

“I’m not saying I’m coming back and playing, I don’t know,” James, who is a free agent after next season, told The Athletic.

“I don’t know what my future holds. I don’t even know when I’m free.”

Judging by his reception on Monday night, that door will be held wide open should James one day decide to return.

Cheered onto the court and serenaded with signs showing messages such as “Come Home LeBron?!”, love for James endures in Cleveland, and it would seem the feeling is mutual.

“They’ve given me so much for 11 years when I was here for my first stint and my second stint,” James told reporters after the game.

“To be able to be in front of my family and friends, the drive up 40 minutes from my hometown of Akron, it means a lot to me.

“They’ve seen me pretty much my whole life play basketball … that’s the difference between here and every other arena in the world.”

A perfect encapsulation of the night came in the second quarter when James, surging to the basket, sent former teammate Kevin Love sprawling with a devastating dunk.

At a later break in play, Love put his old friend in a headlock as the pair laughed about the earlier incident.

Far from looking to rub salt into the wounds, James told reporters that he wished he could take the points back.

“To be completely honest, I hate that it had to be him,” James said. “He’s my guy, that’s my brother and I hope I’m still invited to the wedding.

“That’s not even in my all-time dunks, so take it out, I didn’t mean it. K-Love, I love you and I take it back, I wish I could take those two points back and we still win the game by nine.”