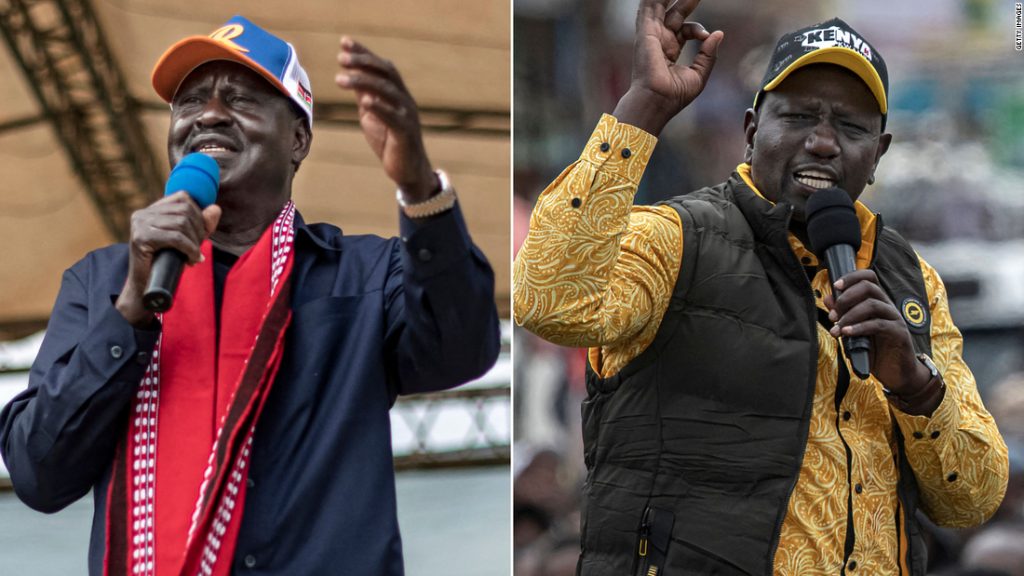 Voters across the country began queuing as early as 2 a.m. local time in some locations, according to local media.

Analysts say the race is close with neither of the leading candidates polling significantly higher than the other. If no candidate wins more than 50% of the vote, the election will go into a run-off for the first time in Kenyan history.

Tuesday’s presidential election, according to opinion polls, is considered a two-horse race between Deputy President William Ruto, 55, and veteran opposition leader Raila Odinga, 77.
Odinga is a businessman and politician who served as prime minister of Kenya for five years following the disputed presidential election of December 2007 that resulted in widespread protests and violence, leaving more than 1,000 people dead.

Odinga is part of Kenya’s political dynasty; his father Jaramogi Oginga Odinga was the first vice president of independent Kenya.

He earned a master’s degree in mechanical engineering in East Germany in 1970 and was a one-time lecturer at the University of Nairobi after his studies abroad.

He is participating in the poll for the fifth and final time, he says after failing at his four previous attempts.

Odinga has received the backing of former rival President Kenyatta, who overlooked his deputy Ruto for the top job.

Fondly known as “Baba” by Kenyans, he has pledged to set up social protection and a universal health care program called Babacare for poor households. Free education up to college level is also part of his plans.

This might be Odinga’s year, says political reporter and analyst Moses Odhiambo.

“There’s a feeling that whichever side the government seems to lean on, wins. If you borrow from opinion polls, then Raila has an advantage,” Odhiambo told CNN.

Odinga’s main opponent, Ruto, describes himself as the “Hustler-in-Chief,” citing his humble beginnings as a chicken seller who fought his way to one of Kenya’s highest political offices.

Ruto, a former teacher who holds a doctorate in Plant Ecology from the University of Nairobi, has adopted a populist “man-of-the-people” approach, designed to capture Kenya’s largest voting bloc — the youth.

And he appears to be succeeding, veteran political analyst Herman Manyora told CNN: “Ruto has excited the youths … almost in a euphoric sense. That might help to make them turn out and vote.”

“There is a world of difference between me and my competitor. I have a plan, he doesn’t,” Ruto says of Odinga.

Ruto was also tried alongside Kenyatta in 2013 at the International Criminal Court in the Netherlands for alleged crimes against humanity following the 2007 election violence. However, the charges were later thrown out.

Although the election would bring about a change of administration, Ruto and Odinga’s affiliation with the present government does not necessarily provide a new political phenomenon, argues analyst Odhiambo.

“Among the front runners, people are keen to balance between what is perceived as continuity and freshness within a continuity,” Odhiambo said.

What are the issues?

Among the key pressing issues for the electorate is myriad economic problems ranging from growing debt to high food and fuel prices and mass youth unemployment.

Parts of the country are also suffering from a debilitating drought that threatens to exacerbate growing insecurity issues.

Analyst Manyora says many Kenyans, especially young people, are disillusioned with the government and might boycott the elections.

“There are things that might affect the turnout. One is the disillusionment in the country with the high cost of living, the helplessness and hopelessness among the youth, unemployment, poverty levels, and the people not seeing anything that the politicians are doing for them,” the analyst said.

He added that Kenya’s problems should ordinarily spur his countrymen to vote for the right candidates irrespective of tribe, but they aren’t “angry enough.”

“One would expect that because of these problems Kenyans will turn out in large numbers at the polls to express their anger at the high cost of living by voting out those responsible … I don’t think Kenyans are at a point where they are angry enough to translate the anger into political action,” Manyora told CNN.

The role of ethnicity

Kikuyu, Luhya, Kalenjin, and Luo are four of the East African country’s most populous ethnic groups.
Outgoing leader Kenyatta is among three of four Kenyan presidents that have emerged from the dominant Kikuyu ethnic group since the country gained independence in 1963.

“The problem in this country is that tribal considerations supersede everything else … Most of the votes cast would be based on tribe; very few votes will come from critical voters,” analyst Manyora said.

Both men traversed the country before wrapping up campaigns at the weekend and sought support from those outside their strongholds.

Both candidates also chose their running mates from the Kikuyu — one of Kenya’s largest voting blocs — also known as the Mount Kenya region.

Ruto is running alongside first-term MP Rigathi Gachagua while Odinga is on the ballot with former justice minister and one-time presidential aspirant Martha Karua.

“There is a growing wave of support around women leadership which has been accelerated by Odinga’s choice of Martha as his running mate,” he said.

Women represent 49% of Kenya’s registered voters, according to the country’s electoral commission.

Only the Kikuyu and Kalenjin tribes have produced the country’s presidents and this is the first election where none of the leading candidates is a Kikuyu.

No candidate from the Luo tribe has won a presidential election.