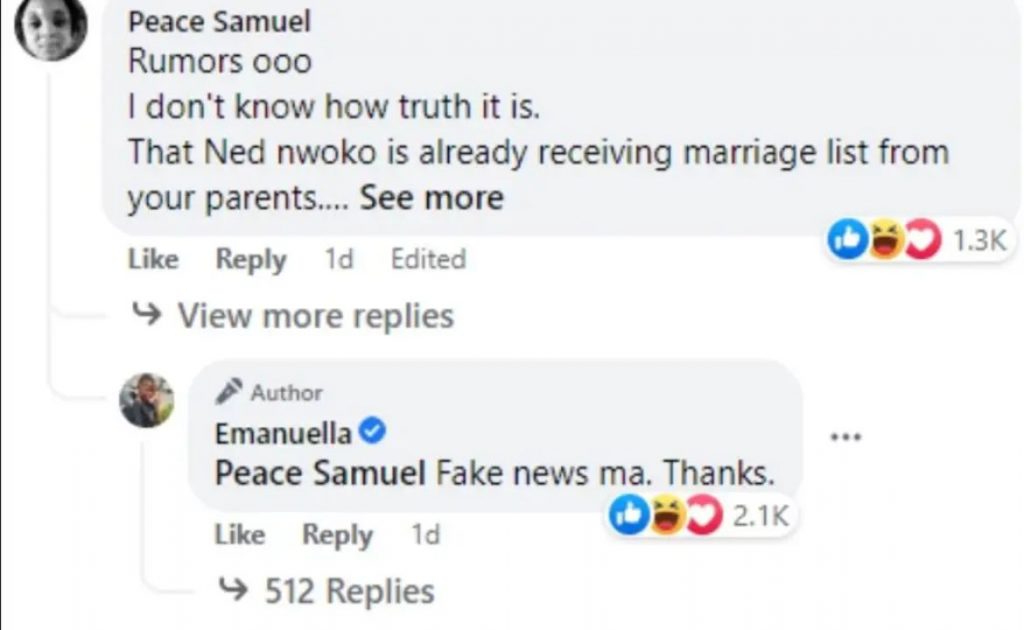 For about 5 days now, rumours have gone rife on the internet that the politician, married to Regina Daniels, was attempting to wed the teenage kid sensation.

The hearsays additionally emphasised that Ned Nwoko is currently in talks with Emmanuella’s family to add her to his numerous wives.

Ned is prepared to make another offer that will see Emmanuella being transferred from Port Harcourt to Asaba via a marriage deal”, it reads.

One fan took things a step further on the child comedian’s official Facebook page by asking if it is true that her family are already submitting a marriage list to Ned Nwoko.

The Facebook user with the name Peace Samuel wrote: “I don’t know how true it is. That Ned Nwoko is already receiving a marriage list from your parents“

“Pls if true…please don’t spoil your future. U don’t know what marriage is”, the fan added.

In her response, Emmanuella stated: “Fake news ma, Thanks.”

It was alleged that Ned Nwoko is in talks with Emmanuella’s family over a marriage proposal list.

However, the husband of actress Regina Daniels, Ned posted on his Instagram page to break the silence and react to the news after a netizen asked.

One of the netizens under the comments section of a post on IG tagged and drew Ned’s attention to the rumours.

In response, Ned Nwoko affirmed that he has beautiful wives. Mr Nwoko in another reply said the news is false. READ MORE HERE