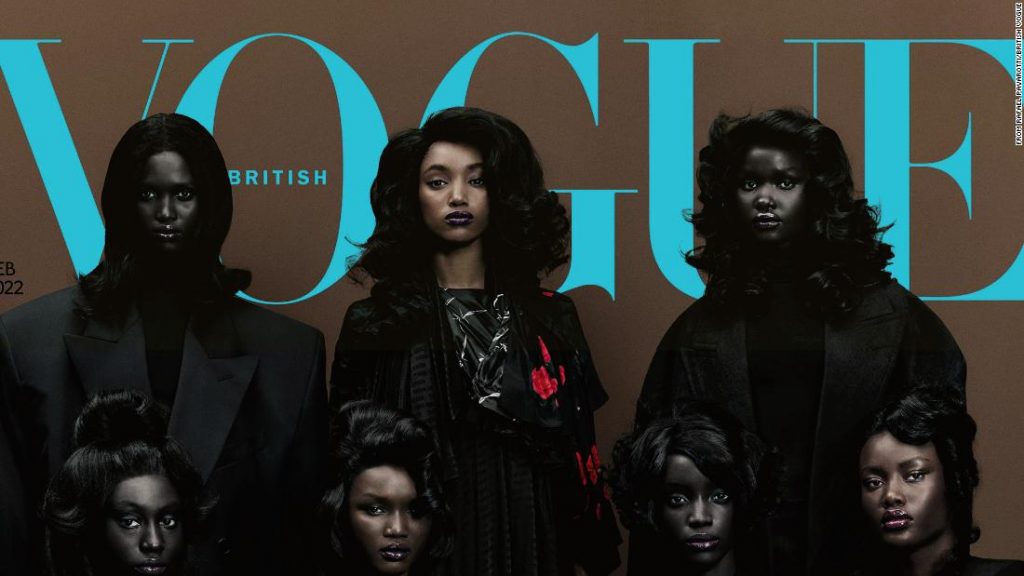 Stephanie Busari is CNN’s Supervising Editor for Africa based in Lagos, Nigeria. All opinions expressed in the article below are the author’s own.

“Sis have you seen this wonderful cover … it’s amazing,” a friend wrote to me in an Instagram message.  It was the British Vogue February 2022 cover, which features an all-star team of African supermodels.

It is one of two cover photos released this month (a second cover image features one of the group, supermodel Adut Akech, posing alone) and, according to British Vogue’s British Ghanaian editor-in-chief Edward Enninful, the images aim to spotlight the rise of the African models shaping the industry.

However, my heart sank when I saw the picture of the models. I wanted to love it, but the image left me confused and raised questions about the execution of this important cover.

Why are the models depicted in a dark and ominous tableau, the lighting so obscure to the point they are almost indistinguishable on a cover meant to celebrate their individuality? Why were they dressed all in black, giving a funereal air, and an almost ghoulish, otherworldly appearance?

Why were they sporting strangely-coiffed wigs? Many of these women wear their natural hair normally and it would have been great to see that reflected on a cover celebrating African beauty. Additionally, on the cover, the models’ skin color appeared to be several shades darker than their normal skin tone.

The photographs were taken by Afro-Brazilian photographer Rafael Pavarotti, and the images — published in numerous glossy magazines over the years — are consistent with his visual style of presenting Black skin in an ultra-dark manner.

“This is a celebration of women, of matriarchy, and of the beauty of Black women,” Pavarotti said of his first British Vogue cover shoot in an article accompanying the pictures online.

“They are the past, the present, and the future,” he added.

But the lighting, styling, and makeup, which purposefully exaggerated the models’ already dark skin tones, reduced their distinguishing features and presented a homogenized look. Was this the best way to celebrate Black beauty? Would it not have been better to let their natural, unique beauty shine through?

Pavarotti did not respond to requests for comment and Enninful declined CNN’s request for an interview, while British Vogue has not responded publicly to the criticisms. A behind-the-scenes video of the shoot was released along with the cover images. Shot with more natural light, before the women are fully styled, the short clip reveals more individuality, and a variety of dark skin tones, in dramatic contrast to the final result.

In an article published on the Vogue website, Enninful describes the models (Adut Akech, Anok Yai, Majesty Amare, Amar Akway, Janet Jumbo, Maty Fall, Nyagua Ruea, Abény Nhial, and Akon Changkou) as “a powerful cohort of reigning and emerging superstars who have not only come to rule catwalks and dominate campaigns but have shifted the lens through which fashion is seen the world over.”

He added: “No longer just one or two dark-skinned girls mingled backstage, but a host of top models took a meaningful, substantial and equal place among the most successful women working in fashion today. It means so much to me to see it.”

A cover is the highest accolade a magazine can give to a subject, and, historically, Black women have rarely been bestowed this honor.

Former British Vogue editor-in-chief Alexandra Shulman famously noted in a 2017 interview in the Guardian that unknown Black women on the cover sold fewer copies.
So, when Black women appear on the cover of global high-profile magazines like Vogue, these images circulate widely; we feel seen, celebrated, and acknowledged. That is why for many Black women, particularly dark-skinned ones like me, this Vogue cover feels personal.
When the February issue was first unveiled last week, I saw many people, like my friend, saying how stunning and beautiful it was.  So, I took to Twitter to see if others were as conflicted as I was. Hundreds of people replied to my tweet saying they found the images to be a poor representation of Black women.

What I found is that many of us want to love these images, but can’t shake off a feeling of disquiet that is rooted in deeper issues around beauty standards that have excluded us for so long.

Many online critics felt the images were fetishized and pandering to a White gaze, ironic, considering the editorial team behind them consisted almost entirely of people of African descent.

Ghanaian writer Natasha Akua wrote in a private message on Instagram: “When I saw it I immediately was shocked … I feel like I know what statement he was trying to make visually but turning these black models into this strange tableau straight out of a horror movie just felt instinctively wrong.”

“I find the lighting and tones beautiful,” Daniel Emuna wrote. “But my personal complaint is that publications and brands are constantly communicating that the deepest darkest hue in complexion represents the truest essence of Blackness or even Africanness. This is clearly a mark of the white gaze.”

“This image is pure manipulation,” he told me during phone conversation. “This is what they do to South Sudanese models to tell a story about Africa and people are saying we don’t understand the artist’s perspective but you can tell a story and be projecting a false narrative.”

“We don’t want you to make us the Black you want. We want us as us.”

It is undeniable that Enninful and his team have made excellent strides in championing diversity since he replaced Shulman as editor-in-chief of British Vogue. His first cover was the mixed-race model Adwoa Aboah and he has also featured Dame Judi Dench, who at 85 was the magazine’s oldest cover star.

Many of the people who contacted me didn’t want to criticize the February cover because of this work Enninful has done at Vogue, but we must not be afraid to hold even our African brothers and sisters accountable when it is needed.

Change doesn’t happen overnight and open conversation and debate are essential as we make strides to achieve the representation that we all want to see.