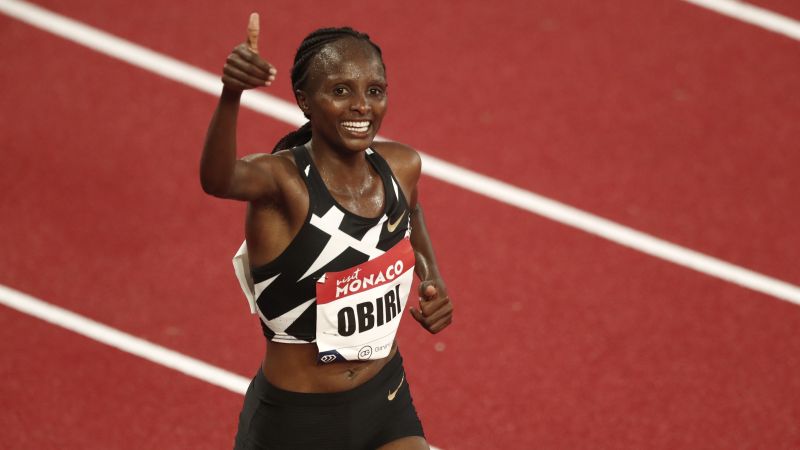 When Hellen Obiri moves 14,000 kilometers from Kenya to Colorado later this year, she already knows she’ll miss some of the comforts of home.

That includes Kenyan food and the country’s staple of ugali – a dense porridge made from maize flour.

“Kenyans, we like eating ugali,” Obiri tells CNN Sport. “I will have to find where I’m going to make my Kenyan food over there (in the United States).”

A good ugali may hold the keys to successfully fueling the next steps of her distance-running career. Obiri, a two-time world champion over 5,000 meters, is racing her first ever marathon in New York later this year, ahead of which she will team up with a new coach and new training group in Boulder, Colorado.

It’s common for distance runners to make the move from track to road racing towards the end of their careers, but less common to do so by moving halfway across the world in the way Obiri has planned.

At the start of this year, the 32-year-old joined On Athletics Club (OAC), an elite team based in Boulder and led by former distance runner Dathan Ritzenhein. She hopes to move to the US next month in advance of racing the New York City Marathon on November 6.

“We’ve been wanting to move to the USA for training and to live there, so for me it’s not a difficult move,” Obiri, who will be based outside Kenya for the first time in her career, tells CNN.

“I think as an athlete and for my family, I want to move there to acclimatize well as soon as possible … It will take me two weeks at least to get used to it and catch up with my training over there.”

Boulder’s high-altitude, rolling trails and temperate climate make it an ideal location for distance runners. There, Obiri will join a relatively new team in OAC, which was launched by the Swiss sportswear brand On in 2020.

Under Ritzenhein’s guidance, Obiri has already started her marathon program and this week increases her training load from 180 to 200 kilometers of running per week. She begins the next chapter in her career having established herself as one of the best 5,000 and 10,000-meter runners in the world over the past five years.

Just last month, she won a silver medal in the 10,000m at the World Athletics Championships – clocking a personal best of 30 minutes and 10 seconds – and has won 5,000m silver medals at the past two Olympic Games to go alongside her two world titles in the event.

Her debut in New York will be the first indicator of how Obiri’s track-running pedigree translates over the 26.2 miles of the marathon.

Starting on Staten Island, the challenging course undulates through New York’s five boroughs before finishing down Fifth Avenue and into Central Park.

She says she will miss racing her favorite distance of 5,000m but won’t fully hang up her track spikes with the switch to marathon running.

“You can’t move up to the marathon without speed,” Obiri explains, adding that she hopes to stay sharp by competing in 5,000m races in Kenya next year.

The immediate focus, however, is on getting settled with her family in the US. Obiri hopes, visa-depending, that her seven-year-old daughter, Tania, will move in time to watch the race in New York.

“She’s going to be so excited to go outside the country,” says Obiri. “She actually watches most of my races and she’s so excited about me winning some races over there.

“When I’m out at a race, she knows mommy’s not around, mommy’s going out there to do some work. She actually calls me and says: ‘Mom, do your best and be number one.’ She always wants me to be number one.”

Obiri’s daughter won’t be the only one holding high expectations at the NYC Marathon. Kenyan athletes have dominated the event over the past decade with eight winners in the women’s race since 2010, and those watching back home will be hoping Obiri can add to that legacy.

But regardless of how she performs, when she winds her way through New York’s five boroughs in November, Obiri will signal the start of a new stage in her running career and a new adventure for her family.