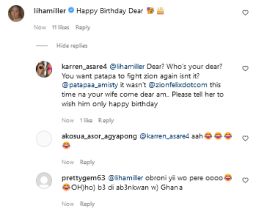 Following Patapaa’s most recent vicious attack on Zionfelix for allegedly trying to destroy his marriage and snatch his German wife from him, some Ghanaians have expressed their worry over Liha Miller’s decision to wish the renowned Youtuber on his birthday.

Blogger, Zionfelix has turned a year older today and as usual, his fans and loved ones have flooded the comments section of his pictures to wish him well.

READ ALSO: Patapaa’s wife spills it all on reports of sleeping with Zionfelix

Liha Miller is amongst the numerous people who have taken to their timelines to wish Zionfelix a happy birthday and also seek God’s mercies and gracefulness on him.

Although it is a harmless wish from Liha Miller to Zionfelix but some social media users have chided her for wishing the blogger a happy birthday.

According to these people, Liha Miller’s birthday message to Zionfelix might precipitate Patapaa to launch another dangerous campaign against the blogger.

As suggested by one of the commentators on Liha’s birthday message to Zionfelix, she should have made her wish more friendly instead of using certain tags that would only infuriate her husband to beef with the blogger once again.

READ ALSO: Patapaa’s wife hangs out with Zionfelix in the streets of Köln

Patapaa who is an attention seeker might leverage this development to make it into the headlines once again as usual.