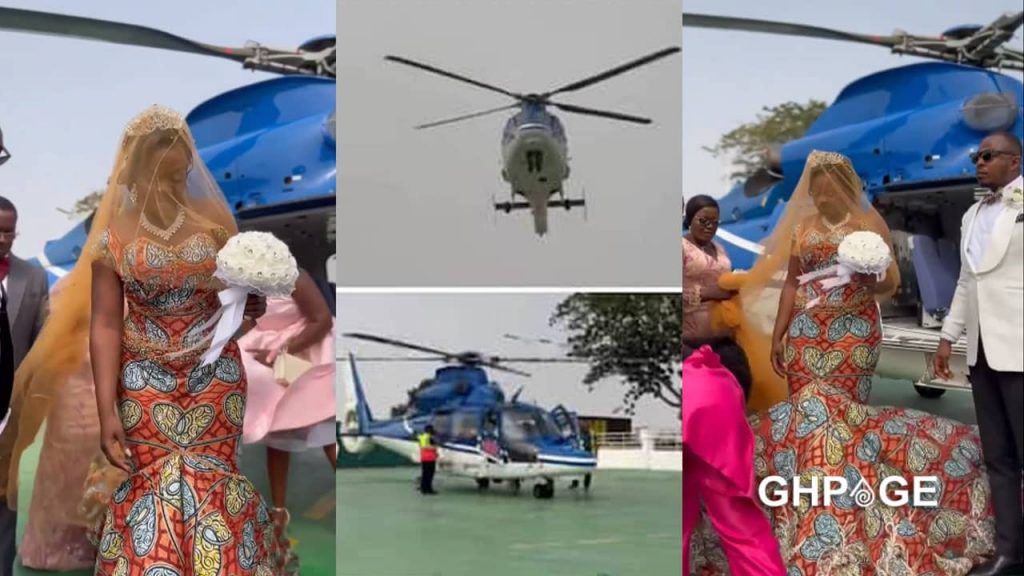 A breathtaking video of a woman arriving at her wedding ceremony in grand style has stirred massive reactions on social media.

The bride, a Ghanaian named Samantha, had what could be considered the dream wedding of many people as she got married to her fiancé, Charles, on Saturday, March 19, 2022.

But in an unconventional style, she flew to the venue in a helicopter before being handed over to her husband by her father.

In a video sighted on Instagram, Samantha was seen being ushered out of the helicopter by her maidens right after it landed.

Her father held her hand and gave it to the groom to carry on.

Watch the video of her arrival below:

As if the arrival in a helicopter was not eye-catching enough, Samantha made a bold fashion statement with her floor-sweeping wedding gown.

Instead of wearing the widely-known white lacey material for weddings, her gown was made from a colourful African print material which is popularly known as Ankara.

It took the help of over six people to lay the edges of the gown perfectly on the floor.

Weddings and marriage ceremonies are considered special occasions that may happen once in a lifetime for some individuals.

For this reason, many people go all out to have their dream weddings.

Samantha’s style is the least of several magnanimous weddings seen around the world.