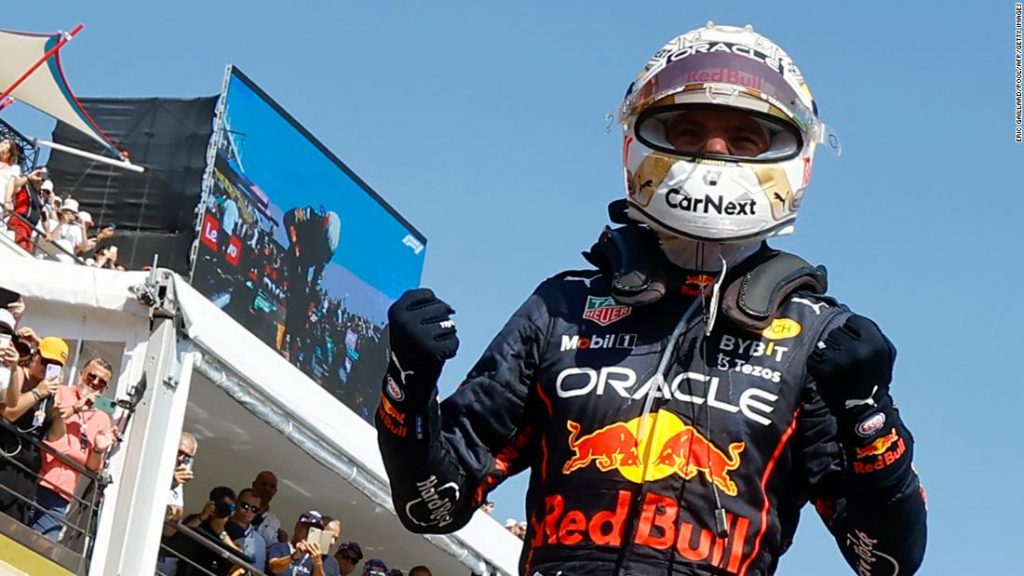 An anguished scream on team radio from Leclerc summarized another frustrating day for Ferrari, after the Monegasque driver — having led from pole — slammed into the wall at high-speed on lap 18.

It is the third time this season that the 24-year-old has failed to finish a race having led. Leclerc has converted only two of his seven pole starts into wins, with the latest gifting Verstappen the opportunity to open up a 63-point gap in the driver’s championship.

And Red Bull’s reigning world champion — after checking in with his team to ask if Leclerc was ok — made no mistake to win his 27th career grand prix, and his second in a row at the Circuit Paul Ricard.

“The car was quick today,” Verstappen said. “Unlucky for Charles, I hope he is OK, but I just did my race and looked after the tyres.

“I always try to get the most points possible. Some moves, you see they are on, and sometimes you just have to back out and wait for the end of the race. That’s what we did.

“There are plenty more races to come where you have to score points. In that aspect, today was a great day.”

Finishing fourth from pole at his home race in Monaco after an errant pit stop strategy, a double DNF at Azerbaijan, fifth in Canada, and frustrations with team orders in Great Britain; Leclerc’s fortunes had looked to be changing with a win in Austria earlier this month.

A first victory since April had looked set to thrust him back into championship contention, and the Ferrari driver started strongly in France, getting away well and starting to steadily build a lead from Verstappen.

But disaster struck on lap 18 when Leclerc appeared to lose the rear of his car heading into the fast turn 11, spinning into the wall. A safety car soon followed, but the 24-year-old emerged from the car unscatched.

“No!” he screamed on team radio, initially appearing to blame a throttle issue that had almost cost him the race in Austria, but he later admitted it was his error.

“I’ve been saying I think I’m performing at the highest level in my career but if I keep doing these mistakes then it is pointless to perform at a very high level,” Leclerc told Sky Sports.

“If we lose the championship by 32 points at the end of the season, I will know where they’re coming from and it’s unacceptable. I need to get on top of those things.

“It’s been a very difficult weekend for me. I struggled a lot with the balance of the car … when it’s warm like this it’s very difficult to be consistent.”

A superb recovery drive from teammate Carlos Sainz — starting from the back of the grid following a power unit penalty — provided some consolation for Ferrari, yet even his fourth place finish was not without incident for the team.

The Spaniard had been discussing a potential pit stop over team radio prior to a tense battle with Perez. Pushing to overtake the Mexican, Sainz was wheel to wheel with his rival when his pit lane crew chimed in over the radio to advise on the pit stop strategy.

“Not not, not now,” Sainz shouted over team radio, later adding, “Come on guys.”

Perez was later involved in another thrilling battle with Russell, falling behind the Englishman with just two laps remaining after reacting slowly to the end of a virtual safety car.

Russell jumped ahead and held his lead to cap a fine day for Mercedes, as he moves to within a point of Sainz in the driver’s championship, with a happy — albeit exhausted — Hamilton 16 points behind.

“It was a tough race because my drinks bottle didn’t work but what a great result considering we’ve been so far off these guys all weekend,” Hamilton said.

“Reliability is one thing my team is amazing at so huge congratulations to the team back at the factories and the team here, without them we wouldn’t get this podium. George did an amazing job as well.”