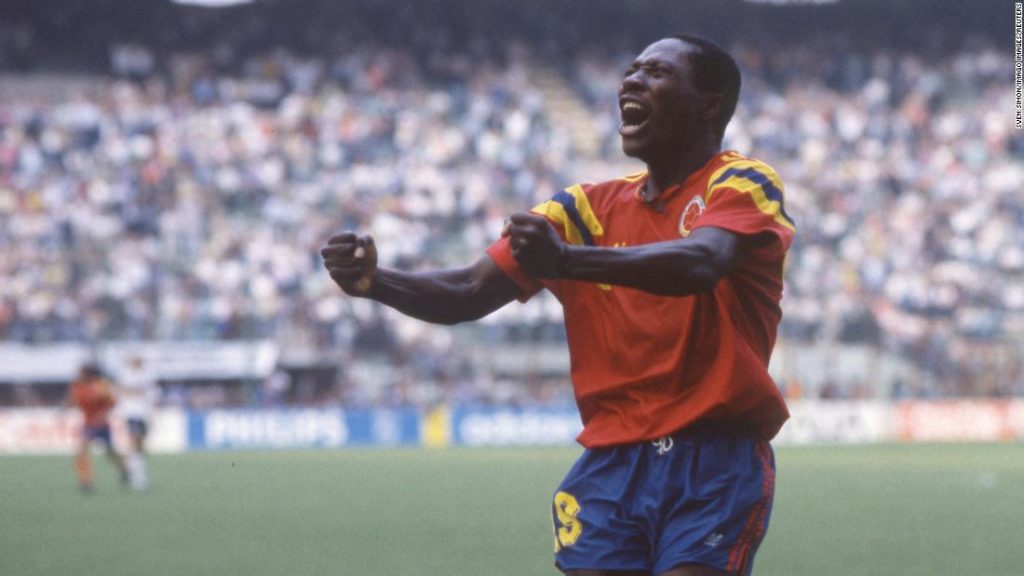 That is why the 55-year-old’s death was met with an outpouring of emotion in his home country.

“This is a huge loss for his family and friends, and at the same time is a regrettable loss for our sport, where we’ll miss him and remember him with great care, appreciation, respect and admiration,” the Colombian Football Federation said in a statement.

“We send strength, support and our condolences to his family, hoping that they can support this sad and painful loss.”

An influential figure among Colombia’s golden generation of players in the 1990s , the versatile midfielder signaled a new era for the country’s football team.

Many will remember him for his goal against West Germany at the 1990 World Cup in Milan’s San Siro stadium — one of the most memorable goals in his nation’s history.

After a flowing passing move, it was left to Rincón to strike the ball between the keeper’s legs with just seconds left to play.

With it, Rincón had secured a 1-1 draw against the eventual World Cup winners and progress to the Round of 16 after Colombia’s 28-year absence from the tournament.

The joy on his face during the wild celebrations likely matched that of millions of Colombians who would have been inspired by that team.

While becoming a figurehead for his national team, Rincón also enjoyed a successful club career.

Born in 1966 in Buenaventura, western Colombia, Rincón went on to play for Santa Fe and América de Cali, with whom he won three trophies.

He then moved to Brazil, specifically Palmeiras, in 1994, before spells with some of Europe’s top teams.

He played in Italy with Napoli and then later became the first Colombian to play for Real Madrid.

In truth, Rincón did not have a happy time in Spain and returned to Brazil in 1996, initially on loan at Palmeiras and then permanently with Corinthians in 1997.

He played the remainder of his career in Brazil, winning the first Fifa Club World Championship with Corinthians in 2000, before retiring as a player in 2004.

Retirement saw him turn to coaching and he had spells with a number of lower-league clubs in Brazil.

An array of his former clubs paid tribute to the man who brought so much joy to so many during his playing career.

Palmeiras called him an “idol,” while Real Madrid said the club was “deeply saddened” by the news.

In later life, Rincón became an assistant to former Brazil coach Vanderlei Luxemburgo at Atlético Mineiro in 2010 and to Jorge Luis Pinto at Millonarios de Colombia in 2019.

Following his death, many will remember Rincón as the player who captured Colombia’s imagination during a special period in the country’s sporting history.