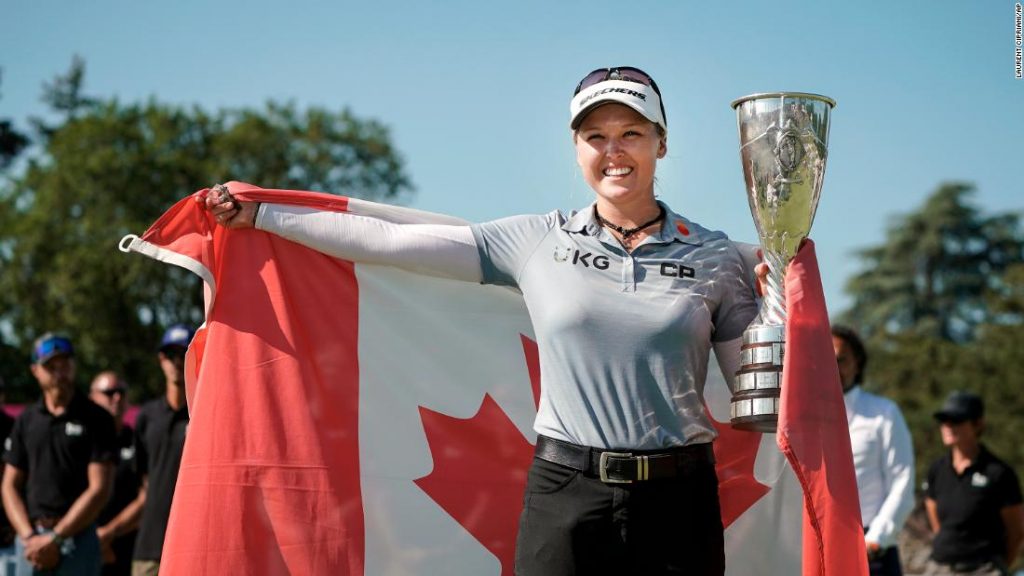 The 24-year-old bounced back from two bogeys and a double bogey to birdie three of the last five holes to secure a one-stroke victory over American Sophia Schubert at 17-under.

A birdie putt at the last crowned Henderson as the first Canadian golfer, male or female, to win multiple titles, adding to the maiden major she won as an 18-year-old at the KPMG Women’s PGA Championship in 2016.

Her 12th victory on the LPGA Tour extends her lead as the most successful Canadian golfer by wins.

On a deciding day when just two shots separated Henderson from the five players tied in third at 15-under, her even par-71 marked her highest score after carding 64, 64, 68 across the opening three days.

“It was definitely an interesting day … not the start that I wanted,” Henderson said. “I stayed pretty patient, as patient as I could under those circumstances.

“The saying is that ‘majors are won on the back nine on Sunday’ so I just tried to keep that frame of mind and knew that I was still in it if I could have a solid back.”

The World No. 10 had carried a two-stroke advantage into Sunday, but a slow start opened the door for a string of players to surge into contention.

Schubert nudged ahead at the 12th, but Henderson clawed her way back to level the American ahead of the final hole.

Disaster struck when her tee shot skewed into the trees as Schubert made the green for birdie, but the Canadian once again recovered superbly to escape trouble. And when Schubert’s putt excruciatingly rolled around the cup, Henderson was left with a 8-foot birdie chance to avoid a playoff.

Henderson made no mistake, rolling home to claim victory before being showered in champagne and water by her fellow competitors and sister Brittany, who caddies for her.

“To be sitting here a two-time major championship is just an unreal feeling,” she told reporters.

“In 2016, winning the first major changed my life. My world ranking shot up and I just received a ton more attention from fans and media. It also made me feel like I really belonged out here and that I could contend for big, major championships and compete against the best in the world, which is an amazing feeling.

“It has been a long time and getting off to a fast start early this week, it just felt great to be at the top of the leaderboard at a major. I just tried to take that excitement as far as I could.”

Her $1 million winners payout lifts her career earnings to $10,237,150, making her the 24th player in LPGA Tour history to pass the $10 million mark, according to the LPGA.

‘I want to cry tears of happiness’

After taking a short break from the game, playing no LPGA events in May, the Canadian has since won two events in four outings after victory at the ShopRite LPGA Classic in June.

“I worked a lot with my sister and also with my Dad, who’s my coach,” Henderson said.

“And time with my Mom back home, it just really helped gain some perspective and put my head in the right place so I could come back out on tour and compete.

“I’m just really excited for what the rest of the season holds,” she added.

For Schubert, US Women’s Amateur champion in 2017, it was an agonizing end to what had been a hugely impressive performance in just her second major as a professional.

The $586,262 prize pot the 26-year-old takes home for her runner-up finish is just over seven times the $82,796 she accumulated from her 11 previous LPGA events this season, according to the LPGA website.

“I’m proud of myself, proud of everyone that’s helped me get to this point. It came just short, but I know that I’ll be back so I’m really happy.

“This was something that I always wanted. I knew I could get there. There was a little bit of doubt, but I couldn’t be with better company.”