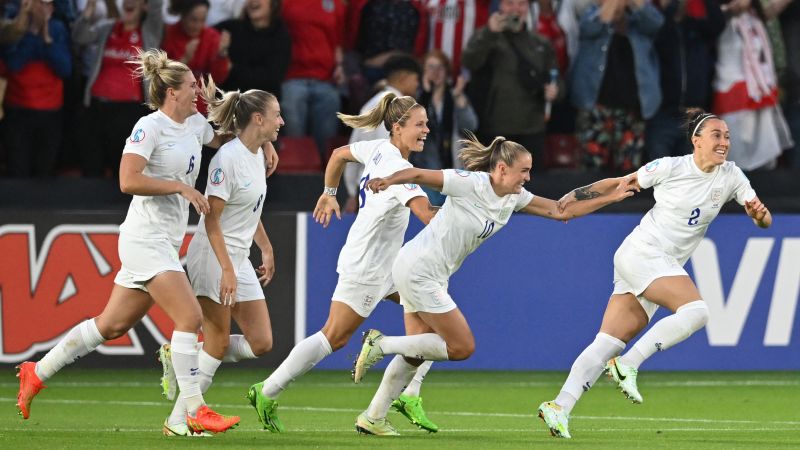 England’s women banished the heartbreak of their three previous major semifinal defeats by beating Sweden 4-0 to reach the final of Euro 2022.

It didn’t all go host England’s way, however, as Sarina Wiegman’s side had to weather some serious first-half pressure from a world class Sweden side.

But Lauren Hemp’s smart turn and finish after the half-hour mark settled England’s obvious nerves and from then on there only looked like being one winner.

Lucy Bronze’s header from a corner early in the second half and then a stunning back-heeled goal from substitute Alessia Russo sent the 28,624 fans inside Bramall Lane into rapture, before Fran Kirby’s lob added gloss to an already remarkable scoreline.

Sweden, after all, has reached the final at the two previous World Cups and is currently ranked second in the world, with England only previously recording three wins over Sweden in its entire history.

In what has already been a record-breaking tournament for attendances and viewing figures, Tuesday’s game set a new record attendance for a Euros semifinal.

After defeats in the semifinals at the 2019 World Cup, Euro 2017 and Euro 1995, England will now finally play the first major final in its history when it takes to the pitch against either Germany or France at Wembley Stadium on July 31.

“I think they have shown a couple of times they are very resilient,” Wiegman told the BBC. “We didn’t start well, we had a hard time.

“We found a way. The players in the game found a way to get out of their pressure. I’m so incredibly proud of them.”

The nerves that were evident for much of the quarterfinal against Spain were again on display in the early stages against Sweden.

England goalkeeper Mary Earps was called into action inside the opening minute, blocking Sofia Jakobsson’s effort after Georgia Stanway had been caught in possession in midfield.

Another smart save from Earps once again kept the scores level just minutes later, this time palming Stina Blackstenius’ bobbled effort around the post. From the resulting corner, Sweden had its best chance yet as Blackstenius this time beat Earps to the ball, but her header could only find the crossbar.

With England looking to dominate possession, Sweden was posing a real threat on the counter. The attacking trio of Blackstenius, Kosovare Asllani and Fridolina Rolfo in particular were giving England’s defenders nightmares, pulling them this way and that with their interchanging runs.

By the half hour mark, England had barely registered a chance worth mentioning. In fact, the highlight of the Lionesses’ opening 30 minutes was a stunning sliding tackle from Kirby, who had tracked back the length of the pitch to deny Sweden a clear goalscoring chance.

England manager Wiegman once again named the same starting XI she had for the first four games of Euro 2022, unperturbed by the somewhat toothless display for much of the quarterfinal against Spain.

Wiegman needed all of her tactical nous to turn that game around with substitutions, but her trusty top scorer Mead made sure that wouldn’t be necessary this time.

With 10 minutes left to play in the first half, England found the breakthrough seemingly out of nowhere. After Lauren Hemp’s cross into the box missed Ellen White’s boot by an inch, Bronze did well to keep the ball in play and put it back into the penalty area.

Mead took one touch, swiveled and drilled the ball into the far corner to send Bramall Lane crowd into delirium. It was a wonderful goal, perhaps her best of the tournament so far, and put her into outright first place in the race for the Golden Boot with six goals.

It also equaled the most goals scored at a single European Championship, matching Inka Grings’ tally from Finland 2009.

More importantly, however, it finally settled England’s nerves and for the first time in the match Wiegman’s team began to dominate. Chances came for Kirby and Stanway, but neither were able to test Rut Hedvig Lindahl in the Sweden goal from distance.

When the half-time whistle came, it was Sweden that was relieved to hear it and England was now just 45 minutes away from the first major final in their history.

The second half began in identical fashion and England immediately had its opponent on the back foot once more.

It was again Hemp down the left causing Sweden all sorts of problems and the Manchester City winger’s cross into Mead was blocked behind by a Swedish boot. However, a towering header from Lucy Bronze from the resulting corner sneaked its way in past the far post and put England in complete control of this semifinal.

Russo has been England’s supersub in this tournament, registering three goals off the bench so far. When she was brought on before the hour mark against Sweden, her impact was immediate as a driving run and low cross found Hemp at the far post.

But with the goal gaping, the winger could only divert an effort onto the crossbar.

Sweden did have a wonderful chance to half the deficit, but Earps’ full-stretch fingertip save denied Blackstenius a goal.

However, with just over 20 minutes left to play, the match was ended as a contest by a moment of genius from Russo. After her initial effort – which she should have scored – was blocked by Lindahl, Russo improvised with a cheeky backheel that caught the Swedish keeper completely off guard as it squeezed through her legs.

It was a piece of magic that encapsulated the very best of this England team as it began to dismantle one of the best teams in the world.

Kirby soon added the icing on the cake with just over 15 minutes left to play, lobbing the ball from range over Lindahl. The Swedish keeper really should have done better, but let the ball squirm through her hands, capping off a night she will want to forget in a hurry.

The victory continues Wiegman’s remarkable personal record of never having lost a game at a Euros. Everyone in England will be hoping that run continues for just one more match.