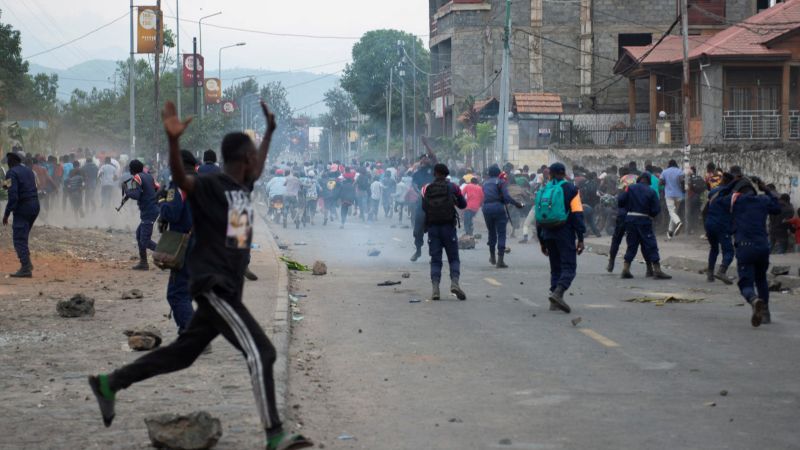 At least five people were killed and about 50 wounded during a second day of violent anti-United Nations protests in Democratic Republic of Congo’s eastern city of Goma on Tuesday, a government spokesman said.

Some stormed the houses of UN workers who were evacuated from the city in a convoy of vehicles escorted by the army, another reporter said.

Demonstrations began on Monday, when hundreds attacked and looted a MONUSCO – the United Nations Organization Stabilization Mission in the country – warehouse in Goma demanding that the mission leave the country, and flared again on Tuesday.

They were called by a faction of the ruling party’s youth wing that accuses MONUSCO of failing to protect civilians against militia violence.

“At least 5 dead, around 50 wounded (in Goma),” government spokesman Patrick Muyaya said in a tweet, without saying who was responsible.

The Reuters reporter at the scene said peacekeepers fired tear gas and live bullets at the crowd, killing two and wounding at least two others.

Protesters were initially peaceful, but turned violent as some picked tear-gas grenades off the ground and threw them back at the MONUSCO warehouse.

Army and police officers deployed to the scene did not open fire.

Local officials have called for calm, even as similar protests broke out around 200 km (124 miles) north of Goma in the city of Butembo on Tuesday.

A local activist at the scene, Afsa Paluku, told Reuters security forces intervened and fired at demonstrators, killing two and wounding several others.

The police did not immediately respond to a request for comment.

MONUSCO has not yet commented on Tuesday’s protests and a spokesman could not be reached.

The mission has been gradually withdrawing for years.

Resurgent clashes between local troops and the M23 rebel group in east Congo have displaced thousands. Attacks by militants linked to Islamic State have also continued despite a year-long state of emergency and joint operations against them by the Congolese and Ugandan armies.

MONUSCO took over an earlier peacekeeping operation in 2010.