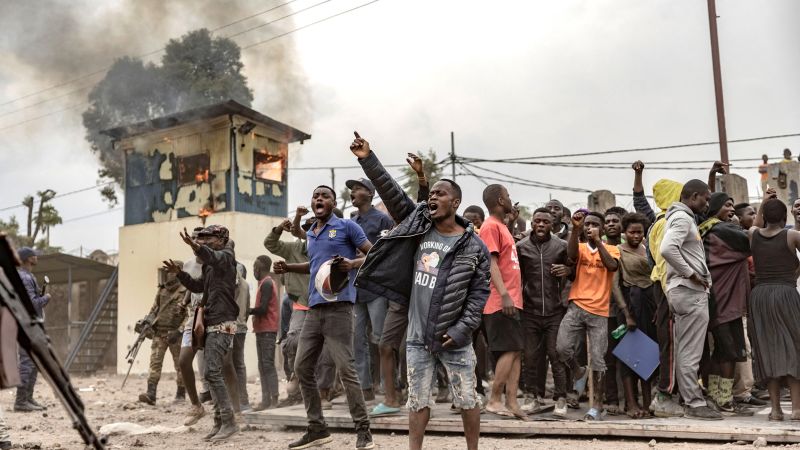 Two decades ago, a UN force landed in the Democratic Republic of Congo (DRC) to keep the peace in a volatile territory almost overrun by armed militias. But with the insurgents still on the prowl, locals say the peacekeepers have outstayed their welcome.

Since July 25, anti-UN protests have raged on in the DRC’s eastern region, with 36 people – including four peacekeepers – dead and 170 wounded as of Wednesday, the DRC government told CNN.

Protesters are demanding the withdrawal of UN forces from the central African country for failing to rein in rebel groups in the east who mastermind lethal attacks against civilians.

Last month, soldiers attached to the United Nations Organization Stabilization Mission in the Democratic Republic of the Congo, also known as MONUSCO, were accused of firing live rounds at demonstrators as they battled to contain violent protesters who “attacked and looted” UN buildings, according to Reuters.

In another shooting incident on Sunday, two UN soldiers were accused of opening fire at a border post between Uganda and the DRC, killing two people and injuring 15 others, a DRC government spokesman told CNN Monday.

“There was an accident at the border between Uganda and the DRC yesterday (Sunday),” said DRC’s communications minister and government spokesperson Patrick Muyaya.

“Some UN peacekeepers came back from vacation and when they got to the border, the (DRC) immigration service told them to come back after three days … because there is a lot of pressure at the moment in the DRC. But they decided to force their way through and started shooting. Two people died and 15 people were wounded.”

The MONUSCO force in a statement described the actions of its personnel involved in the shooting as “unspeakable and irresponsible behavior,” adding that the officers had been arrested and were being investigated.

“Contacts have also been established with the country of origin of these soldiers so that legal proceedings be initiated urgently with the participation of victims and witnesses…,” the statement added.

In 2010, MONUSCO replaced an earlier UN operation called MONUC, which was established to help bring peace and stability to the DRC.

What began as a “small observer mission,” in 1999 with a small deployment of 90 soldiers, transformed into the “UN’s largest and most robust operation,” and by 2000, the UN Security Council had authorized more than 5000 military personnel for the MONUC force to the DRC.

As of November last year, MONUSCO had over 12,000 troops and more than 1,600 police officers deployed in the DRC.

Muyaya said the DRC public has become disenchanted with the UN peacekeeping force for failing to secure the country.

The DRC has grappled with decades-long militia violence as state forces struggle to rein in rebel groups. Fighting between government troops and the M23 rebel group, which seeks control of the country from its stronghold in eastern DRC, has left many dead and displaced thousands.

“People are upset and tired of UN peacekeepers in the DRC because they have been here for the past 20 years but the security situation hasn’t changed a lot,” he said.

At least 29 civilians have been killed by M23 between June and July this year, according to Human Rights Watch.

The deadly militia also controls several towns and villages of the North Kivu province in eastern DRC, the rights group said in a report.

Reacting to the anti-UN protests, Khassim Diagne, a Deputy Special Representative of the UN Secretary-General, said in a series of tweets that the MONUSCO never said that it was the solution to the DRC’s security crises.

“The MONUSCO never claimed to be the panacea to the security problems of the DRC. We operate in support of the state to protect and bring stability,” Diagne wrote.

In another tweet, Diagne said a misunderstanding of the MONUSCO has led to “excessive expectations.”

“We need to communicate better. Lots of people misunderstand the UN, the Security Council, and the MONUSCO. This leads to excessive expectations, suspicion, and forgetfulness of accomplishments,” he tweeted, adding that the MOUNSCO force had already withdrawn from eight provinces in the DRC.

Thomas Fessy, a senior DRC researcher for Human Rights Watch, told CNN that demonstrations against the UN mission have been taking place over the last decade, but have escalated due to an unending cycle of violence in eastern DRC.

“Attacks and killings are relentless, displacements of people higher than ever, so people are questioning MONUSCO’s ability to protect civilians and help defeat a myriad of armed groups,” Fessy added. “The frustration and anger of Congolese people at the UN mission shouldn’t be overlooked.”

Government spokesman Muyaya added that the protests are also driven by comments made in June by MONUSCO spokesperson Mathias Gillmann, that UN forces do not have enough equipment to combat M23.

“The spokesperson of the UN here made a statement saying the UN is not able to fight M23 … and was explaining that M23 has modern weapons,” Muyaya said.

The DRC government ordered Gillmann’s expulsion from the country Wednesday, accusing him of making “indelicate and inappropriate” statements that exacerbated tensions between MONUSCO and the Congolese people.

In a June briefing, the representative of the UN Secretary-General in DRC and head of MONUSCO, Bintou Keita told the UN Security Council that the security situation in DRC’s eastern region had deteriorated due to intense attacks by M23 and other armed groups.

Keita said such attacks were capable of overwhelming MONUSCO.

“Should the M23 continue its well-coordinated attacks against FARDC (DRC’s armed forces) and MONUSCO with increasing conventional capabilities, the Mission may find itself confronted by a threat that goes beyond its current capabilities,” she said.

Keita added that in recent clashes, the M23 fought like “a conventional army” rather than an armed group.

“The M23 has firepower and increasingly sophisticated equipment…as well as accuracy on aircraft… The threat this poses to the population and the blue helmets (UN peacekeepers) who have the mandate to protect is obvious.”

CNN has contacted the UN mission in the DRC for additional comment.

The UN mission in the DRC has been gradually pulling out its soldiers from the troubled country for years.

In 2010, the UN Security Council resolved to withdraw 2000 peacekeepers from the DRC following pressure by then President Joseph Kabila who had demanded a complete withdrawal of UN fighters from the country.

The DRC government under current President Felix Tshisekedi said it was working with the UN on a withdrawal plan.

Government spokesman Muyaya told CNN the government was in agreement with citizens on the complete withdrawal of UN troops from the DRC, but it may take up to one year to evacuate all of them.

“As a government, we are on the same level with our people but the difference is that we are working with MONUSCO on a plan for their retreat. We’ve been working on that since September last year. Even if we decide to end our collaboration with them today, it will take at least six to nine months or maybe one year to make sure they leave.”

Muyaya added that the government was under pressure to handle the situation quickly. However, the DRC is expected to come under more pressure post-UN evacuation when its forces confront militia groups in a solo effort.

Muyaya said the DRC government was also working on a security reform to build a formidable army.

“We are collaborating with MONUSCO on a transition plan. We are preparing them to leave, at the same time, we are making sure we are doing a good reform to make sure we have an army that can handle all the security issues in the country,” he said.