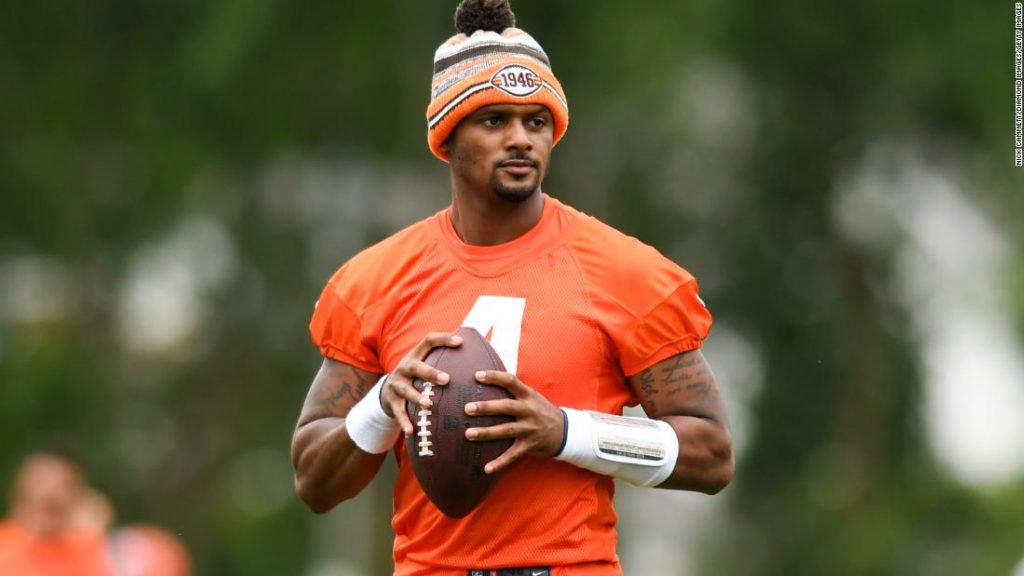 Appearing on ESPN’s “First Take,” attorney Tony Buzbee attacked the investigation, saying he hopes the NFL will appeal the case, but his clients are angered and disappointed by the lenient suspension handed down by a disciplinary officer.

“Don’t expect the NFL to do anything heroic here,” Buzbee said.

Watson was suspended on Monday for six games without pay for violating the NFL’s personal conduct policy in private meetings with massage therapists, according to a ruling by a retired federal judge jointly appointed by the NFL and the NFL Players Association.

Watson has repeatedly denied the accusations.

“I’ve never assaulted, I never disrespected, and I never harassed any woman in my life,” Watson has said. “I don’t have any regrets.”

Two grand juries in Texas have declined to charge Watson with any crimes.

Twenty-four civil lawsuits have been filed against Watson — 23 have been settled confidentially.

Both the NFL and the NFL Player’s Association (NFLPA) have until Thursday to appeal the suspension to NFL Commissioner Roger Goodell.

The NFL said it was reviewing Judge Sue Robinson’s decision and will make a determination on its next steps. The Player’s Association has already said it would not appeal.

An appeal from either party would be heard by Goodell, with his ruling — or his designee — deemed to be the final one, according to the 2020 collective bargaining agreement.

Watson’s attorney Rusty Hardin told CNN he will not comment until after the NFL decides whether to appeal.

Judge Robinson, who was jointly appointed by the NFL and the NFLPA, said she was suspending the 26-year-old for his “predatory conduct.”

“Although this is the most significant punishment ever imposed on an NFL player for allegations of non-violent sexual conduct, Mr. Watson’s pattern of conduct is more egregious than any before reviewed by the NFL,” Robinson wrote in the 16-page ruling.

But, despite those findings, Judge Robinson critiqued the NFL for asking for an unprecedented full-season suspension which would be far lengthier than other players accused of non-violent sexual conduct.

On Tuesday, Buzbee — the attorney for the plaintiffs in the case against Watson — told ESPN he hopes the NFL moves forward with an appeal because that gesture would be well received by the accusers.

“I think that would change the messaging and I think it would be well received by the women I represent,” he said.

“We’ll see what the NFL does going forward.”

In her findings, Robinson wrote that her decision is limited by the record that was presented to her by NFL investigators who are former prosecutors with decades of experience investigating sexual assault cases. She noted that Watson had “allegedly worked with more than 60 massage therapists” during the period under consideration, and that the NFL had “only investigated the claims of the 24 therapists suing Mr. Watson for damages.”

And of the 24, Robinson wrote that the NFL was only able to interview 12 alleged victims. They relied on the testimony of four of those 12 in the case presented to her for review.

Buzbee attacked the way in which the investigation was conducted.

“None of my clients testified in front of the federal judge. I think that’s a common misconception that four people testified. That’s not the case. Not one of them showed up. Not one of them was asked to show up and testify,” he said. “Since those interviews, we have had no contact whatsoever with the NFL.

“They’re trying to manage this as a PR crisis, but as far as trying to do anything to assuage these particular women or women’s rights — or dealing with women’s rights in general — that’s not part of their mission statement and they’ve made that very clear throughout this process.”

On Tuesday, the Cleveland Rape Crisis Center said it was “disappointed” by the ruling to suspend Watson for only six games.

“The 6-game suspension given dangerously mirrors the flaws in our criminal justice systems and sends a grave message to our communities,” the organization said in a statement to CNN on Tuesday. “Far too often those in positions of power and celebrity who commit violence against others are not held accountable for their actions.

“These ongoing headlines are triggering for so many. To survivors, we say we see you and we believe you. Your story matters. Cleveland Rape Crisis Center is available 24/7/365 online or by calling/texting (216) 619-6192.”

The ruling comes after a number of women who worked as massage therapists filed lawsuits against Watson alleging sexual assault or misconduct during massage sessions. Last month, 30 women who have made or intended to make claims against the Texans organization over Watson’s alleged misconduct settled their claims, according to a statement from Buzbee and the Texans’ ownership.

Watson, a three-time Pro Bowler, did not play last season while a member of the Houston Texans because of a trade demand as well as the investigations into these allegations.

Days later, the Browns traded three first-round picks for Watson and then signed him to a five-year, fully guaranteed $230 million contract, the most guaranteed money in NFL history.

Watson will not be paid during his suspension, but the Browns structured his new contract so his base salary is $690,000 his first year and then $46 million for each of the next four years.