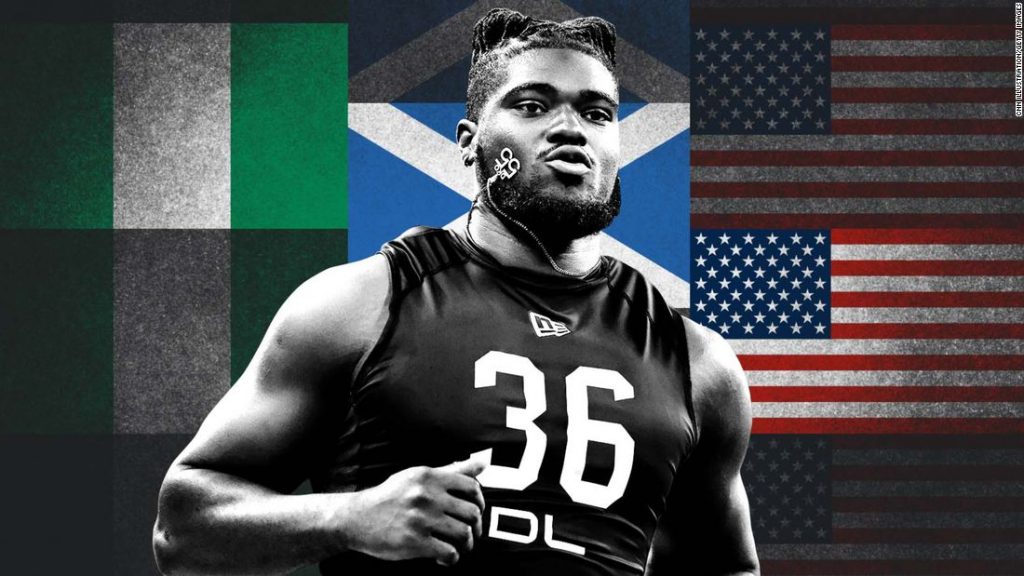 The emotional exclamation of happiness from Ojabo upon being selected bore a little extra oomph due to the trials and tribulations he’s had to face along the way, most notably tearing his Achilles just weeks prior to the draft.

Although some suggested the injury might have affected his draft stock — he was predicted by some experts to be a first-round pick — in falling to the second round, the Ravens might have pulled off a masterful coup, given the wonders of modern science and recovery schedules.

And for a player looking to find his way in the league, it couldn’t have been a better fit for Ojabo. His high school teammate, Odafe Oweh, was selected in the first round of last year’s draft by the Ravens, and the team’s new defensive coordinator, Mike Macdonald, was Ojabo’s defensive coordinator at Michigan.

“Everything that happens in this life to me, it’s not me,” the 22-year-old said. “I’m just living out my script.

“So from where I was ‘supposed’ to go, that’s not my destiny. I’m supposed to go here evidently. What are the chances that coach Mike (Macdonald), all of them come in one year, we go crazy in Michigan, win the Big Ten and then, the next year, I go to league and I follow him.

“It’s not by accident. So I don’t have any worries in this life, man. I just live it day by day.”

So much already achieved by a young man who only started playing the sport five years ago.

Born in soccer-crazy Nigeria, then seven-year-old Ojabo and his family moved to Scotland because of his dad’s job as an engineer.

And it was In Britain that Ojabo blossomed and discovered his love for sports. Along with his brother, he became proficient at both soccer and basketball.

Although his brother was the “main sports guy in the family” at a young age, Obajo is the one to take athletics seriously enough to make a professional career from of it.

“Now, (my brother) is more on a smart side and I kind of took over,” he explained.

When he turned 15, Ojabo decided that to boost his chances of becoming an elite soccer or basketball player, he’d move to the US to enroll in high schools and colleges with programs which could better further his development.

But despite his best laid plans, his destiny soon all changed.

While he was running track at his high school, Blair Academy in New Jersey, Ojabo had a first-row seat at seeing his now-teammate with the Ravens, Oweh, “blow up” while playing American football.

Oweh, who was a year above Ojabo, went on to commit to Penn State to play college football before eventually being drafted by the Ravens in the first round of the 2021 NFL draft with the 31st overall pick.

The rest, they say, is history.

Learning a new sport, in particular one with so many differences to the ones he’d grown up with, was difficult.

“I mean, the hardest thing first is the contact,” he said. “Almost any sport to football is different, hence the helmet. It’s head-to-head. So that was definitely the biggest transition for me.”

Despite having to learn a “whole new sport” with new rules and a “new style of play,” Ojabo took to it like duck to water.

After his first year of high school football, Ojabo received 35 scholarship offers from colleges — including some of the most prestigious programs in the country. It was then a case of visiting the schools and selecting which one would best serve his needs, both academically and athletically.

With advice from his family, Ojabo chose the University of Michigan. “We all know Michigan is the top school in the country,” he said. “And then, of course, the football side, playing for coach (Jim) Harbaugh and the biggest stadium in the country, you can’t really pass those up.”

Although he redshirted his first year — the act of delaying participation to prolong eligibility to compete at college level — and was a reserve in 2020, when he got the opportunity to be a starter, he snatched it with both hands.

In a breakout 2021 season, playing on the other side of the defensive line to the No. 2 overall pick at the 2022 draft, Aidan Hutchinson, Ojabo showcased his explosive athleticism and skills, totaling 11 sacks and five forced fumbles as he put himself on the map as one of the top defensive prospects in the country.

At the end of the season, he decided to declare for the draft to make the final leap to the NFL.

Ojabo remembered the draft process — of being scouted by teams and having draft experts discussing his strengths and weaknesses — as being “definitely exciting” and “also humbling.”

“You know you’re part of that that small percentile of people that get picked up and recognized to go to the next level. So it’s a blessing all along,” he said.

But just as things were coming into place, disaster struck.

For Ojabo, Saturday, March 19 was going as well as he could have imagined.

The linebacker, along with his Michigan Wolverines teammates, were showcasing their athletic and ball skills for the assembled NFL scouts and coaches at the school’s pro day.

But, midway through his workout, as he was driving with the ball having just caught it, Ojabo crumpled to the floor, clutching at his left ankle.

It was later confirmed that he had torn his Achilles. Ojabo remembered being “shocked” by the first injury of his career.

Just a few days later, Ojabo had surgery to repair the damage, but his future was now murky.

Initially, he’d been predicted to get selected in the first round. But after this injury, it was harder to predict.

It was an agonizing first day of the draft as Ojabo was forced to wait. His phone didn’t ring. He remembered sitting and waiting, being “full of anxiety.”

But, on Friday, April 29, his phone finally buzzed. On the other end was the Ravens general manager, Eric DeCosta, informing Ojabo that with the 45th pick of the draft, Baltimore would be selecting him.

“There’s no feeling in this world that really compares: that’s your destiny that’s just been decided in front of the whole world. Just feeling that phone vibrate, you see all the time on YouTube all those highlights, but to really experience it myself was different. It was a blessing.”

Reunited with his high school teammate, playing for his old college defensive coordinator and the older brother — John Harbaugh — of his college coach, Baltimore is like a second home for Ojabo.

Despite his Achilles injury, Ojabo is hoping to have an impact in his rookie year as he aims to return at some point through the upcoming season. He cites Los Angeles Rams running back Cam Akers last season returning from a similar injury six months after suffering it.

But, reflecting on his career so far, despite being a second-round rookie in the NFL, Ojabo said he was just getting started.

“I see myself as one of one, just in the way I play. At the end of the day, I’ve only been playing for five years. So I’m learning along the way and trying to figure it out.”