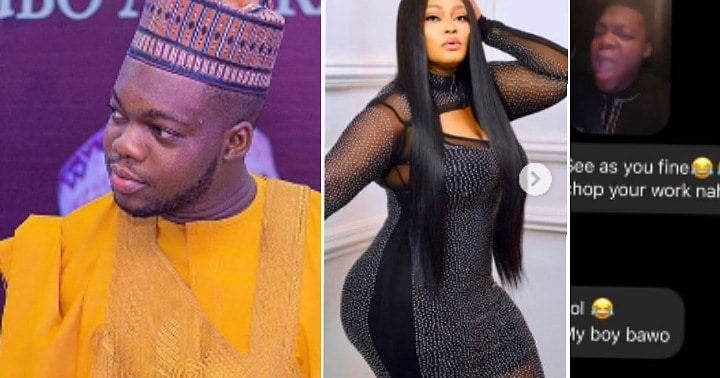 Recent reports have alleged that all is not well in the camp of popular comedian, Cute Abiola and his wife.

Blogger, Gistlovers claimed that their marriage is currently shaky after his wife allegedly got screenshots of his intimate chats with sidechick.

“TALES OF DODOMAYANA ABIOLA TO PE ARA EH NI CUTEEEE: Hello tueh tueh 🚶‍♂️🚶‍♂️🚶‍♂️🚶‍♂️🚶‍♂️things Dey happen oooo.
Information reaching our headquarters is that all is not well with Comedian ABIOLA’s marriage, eye witness who witness the matter talk say in front of staffs say Biola collect him wife phone and seize am hence the lady has not been online,

according to our informant the reason why Biola take collect the phone be say him wife get a lot of evidence saved on the phone as to how The cute ABIOLA is frolicking with almost all the girls wey him Dey do skit with and the one that caught my attention Na Aunty Nollywood, E shock you???

E no shock me at all oo because nor be new thing for that their industry, infact Fathia balogun Na the oga of this table, to Dey knack small small pikin Na that one work, back to our gist ooo, naso oga take seize the phone oo becaus evidence boku for the phone,

fortunately when Aunty Biodun ask Biola say shey him machine him Dey work , Biola sent it to a friend say make them see this Aunty agbaya ooo but later go back go meet the Aunty, that friend wey him send am to send am to another friend to another friend, naso the thing take reach Vawulence headquarters ooo.

Biola is said to carry woman pass Bae u sef, according to our source Bae u Dey learn work, say almost 90 percent of all the girls him Dey feature him Dey first feature them for bed first, him favorite spot Na Pelican hotel for chevron and dmatel for agungi , Na there he Dey carry those girls go,

the wife got tired and threatened him to release all the evidence online including Aunty Biodun’s own, the eye witness narrates that as it is he got another phone for his wife and log her out of her Instagram page currently she doesn’t have access to the page and kept lying to the girl that she lost the phone,

The girl confided in a friend naso that one share am with another friend, fiam matter don reach headquarters, he is also said to be in a serious knacking relationship with this kissie pearl girl that she calls her mum and him Dey lodge that one for hotel well well, the eye witness also narrates that out of anger Biolas wife accused him of always going to Omorbortys”