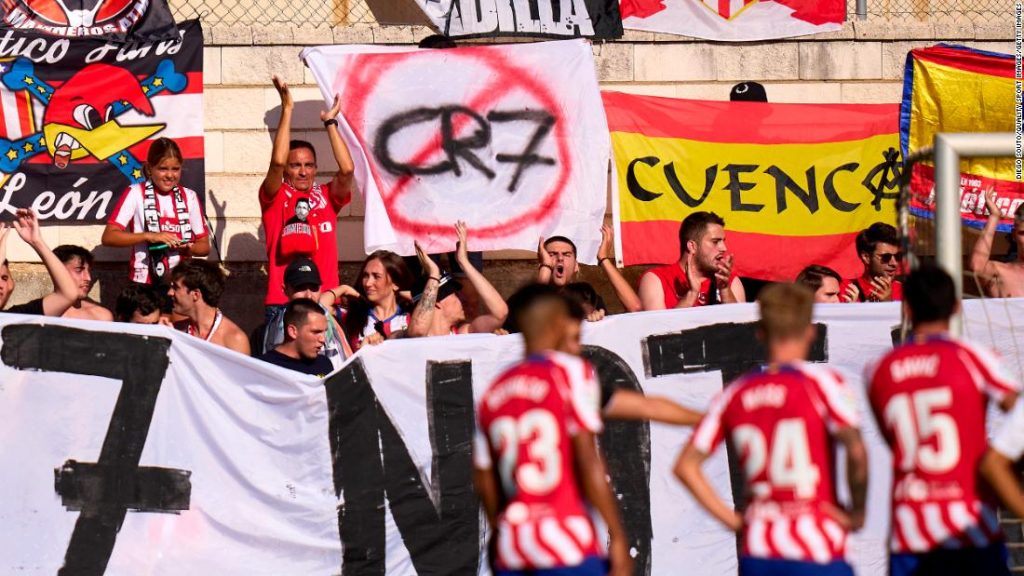 Not happy with his current club’s position, it appears the 37-year-old is on the hunt for a new adventure that can satisfy his desire to play in the Champions League.

United says it has no plans to sell, but peace talks between the two camps have reportedly failed this week with Ronaldo’s heart set on playing at the very highest level while he still can.

But, despite him being one of the greatest players to ever play the game, it seems Ronaldo’s options are limited.

According to widespread reports, Atlético Madrid had been a potential destination but not everyone at the Spanish club was happy with the possibility.

Ronaldo is a legend at Atlético’s archrival Real Madrid and, despite the club refuting the possible transfer, its fans expressed their displeasure at the prospect of signing the striker.

Supporters unfurled banners at a preseason game against Numancia on Wednesday — with one reading ‘CR7 not welcome.’

Bayern Munich was another option after it sold its star forward Robert Lewandowski, but that door now appears to be closed after Bayern CEO Oliver Kahn said the club had decided against pursuing the deal.

“We came to the conclusion that despite all the appreciation for Cristiano, he would not have fit in our philosophy in the current situation,” Kahn told Germany’s Sport Bild magazine.

Ronaldo scored 24 goals in all competitions for United last season in what was an otherwise very disappointing campaign for the club; it fell way short of Champions League qualification and lacked any sense of identity.

New manager Erik Ten Hag has been tasked with turning things around at the sleeping giant and has publicly said he is planning for life with Ronaldo.

“I am looking forward to working with him. Cristiano is not for sale. He is in our plans. We want success together,” the manager said earlier this month, despite the fact Ronaldo missed the entire preseason tour citing family issues.

There is no doubting Ronaldo’s ability to score goals, but it appears his age and enormous wage demands are factors in putting the biggest clubs off a potential move.

There are also many who question whether the Portuguese star is capable of fitting into different team philosophies, including Ten Hag’s demanding style of play.

As the season opener draws closer — United kicks off against Brighton on August 7 — something will have to give in his stand-off with the Red Devils.

Fans will just have to hope the latest transfer saga won’t dent his legacy at the club.