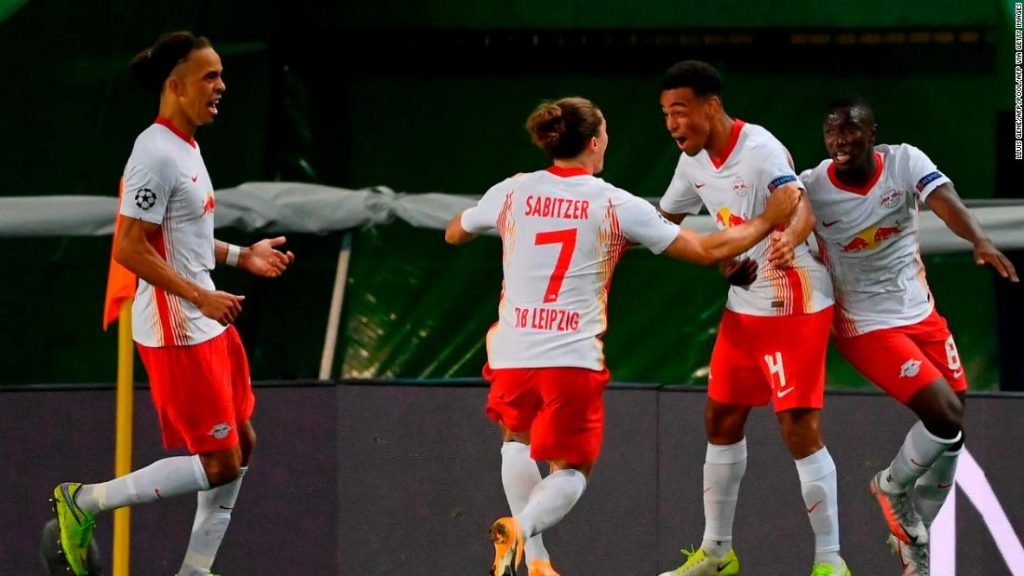 The 21-year-old’s deflected shot in the 88th minute was enough to reestablish the German club’s lead after João Felix’s penalty had canceled out Dani Olmo’s opener.

RB Leipzig, in its current form, was founded just 11 years ago after Red Bull’s billionaire founder took over German fifth division side SSV Markranstadt and the team has been climbing the footballing ladder ever since.

It now has the chance to add another chapter to its incredible story when it faces PSG in the semifinals on Tuesday — after the French champion staged a stunning late comeback to defeat Atalanta 2-1 on Wednesday.

“Great emotions for the club and our team. As a manager you have to look forward,” RB Leipzig’s 33-year-old coach Julian Nagelsmann told BT Sport after the match.

“We have to prepare for the next game. There’s not a lot of time to celebrate but maybe we will have a beer in the hotel then we focus on PSG.

Atletico Madrid may have been slight favorites going into the game against its German opponent, but the Spanish outfit failed to impress.

It may have played without forward Angel Correa and defender Sime Vrsaljkowho, who both tested positive for the coronavirus, but had enough experience on the pitch to put in a better performance.

The second-half introduction of Felix had appeared to give Atletico fresh impetus, but the 20-year-old’s converted penalty stood for nothing in the end.

With the match seemingly destined for extra-time, Adams’ speculative late shot took a wicked deflection off Stefan Savic to end the tie in 90 minutes — sending RB Leipzig into its first Champions League semifinal.

Adams, who has 10 appearances for the US national team, moved to Leipzig from New York Red Bulls in January 2019. He becomes the first American to score in the Champions League quarterfinal with what was his first goal for the club.

“Now it’s about recovering in the right way, getting ourselves right mentally and working on the game plan,” Adams told BT Sport after the game.

“We’re confident in ourselves, you saw that today.”