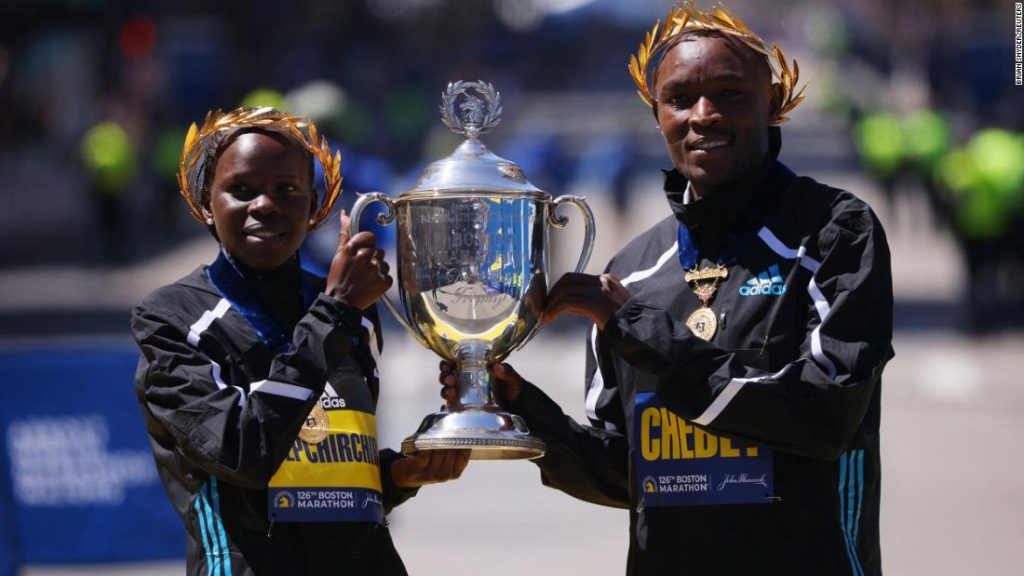 Evans Chebet won the men’s race in an unofficial time of two hours, six minutes and 51 seconds to claim his first Boston Marathon title. Chebet did not finish when he ran in this event in 2018.

The coronavirus pandemic forced last year’s race to be postponed to October 2021, while the 2020 edition was canceled and became a virtual race for the first time in the event’s history.

In the men’s wheelchair division, American Daniel Romanchuk won his second Boston Marathon title, finishing in one hour, 26 minutes and 58 seconds. The 23-year-old finished second in 2021.

Romanchuk earned his first Paralympic gold in the 400-meter wheelchair race at the 2020 Tokyo Games.

A field of more than 28,000 runners from all 50 US states and 120 countries aged 18-83 participated in the famed 26.2-mile course that starts in rural Hopkinton and ends on Boylston Street in Boston.

Jepchirchir won in the third-fastest time in event history, finishing in two hours, 21 minutes and one second and becomes the first athlete to win the Olympic marathon, the New York City Marathon and Boston Marathon.

In the women’s wheelchair division, Swiss competitor Manuela Schär defended her title in one hour, 41 minutes and eight seconds. This is the 37-year-old’s fourth Boston Marathon victory: 2017, 2019, 2021 and 2022.

Eight women finished the 1972 Boston Marathon and five of them were in attendance on Monday, including the winner, American Nina Kuscsik, according to the BAA.

A team of eight honorary women, who “made a powerful impact in areas from athletics to human rights,” participated in this year’s competition honoring the eight original finishers, including one of the original runners, Valerie Rogosheske.