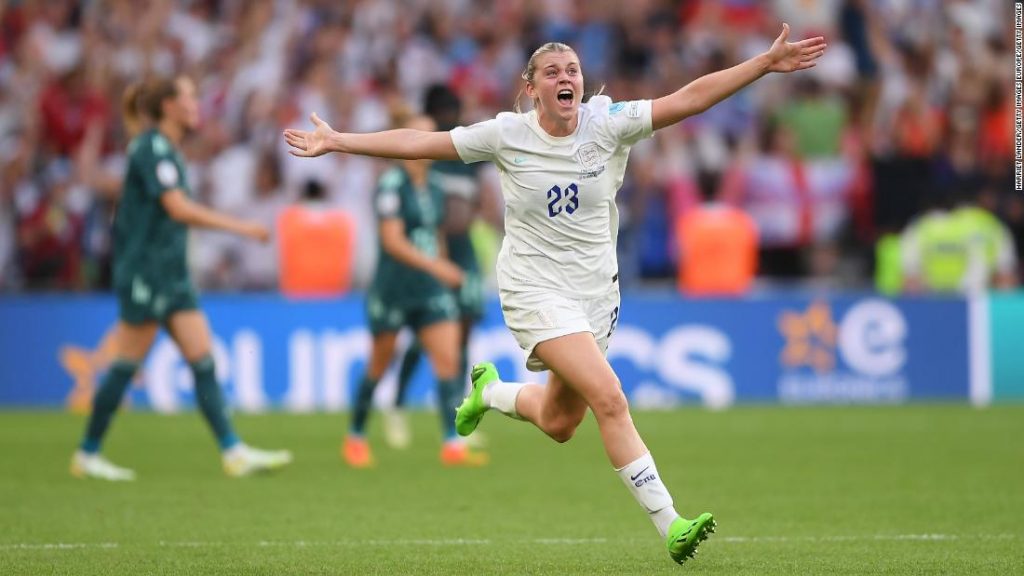 But as the dust settles from the Lionesses’ historic 2-1 victory at Wembley Stadium on Sunday, Russo insists this is “just the start” for her team and what she hopes is a bright future for women’s football in England.

“The final was just an unbelievable day — the stadium, the event, having all those fans there was just surreal,” the Manchester United forward tells CNN Sport.

The Euro 2022 final was played in front of 87,192 people — a record crowd for a European Championship final, men’s or women’s, while 17.4 million across the UK watched the game on TV, according to the BBC.

“This is just the start now for us, I think. We want to pack out stadiums every week, of course we do, but we’ve got to be realistic and we know that it’s a process to get there,” Russo adds.

“We just want to see more people fall in love with the game and accept that women’s football is amazing. The USA set the bar, but the teams are catching up now and it’s really exciting.”

While Russo and England can now look at what lies ahead for the team — qualifiers for next year’s World Cup and a meeting with the top-ranked USWNT — they can also reflect on a roller-coaster European campaign.

The home advantage meant England was among the favorites to win Euro 2022 well before a ball had been kicked, and the expectations only grew after a thumping 8-0 win against Norway in the group stages.

“I think the media put pressure on us as soon as they found out it was a home tournament,” says Russo, “but there’s never been any pressure internally.

“We were really good at keeping the bubble very much closed and very much focused on the games … From day one, we wanted to win the tournament, but at the same time, we realized that we had to shut out the whole outside world.

“We didn’t even know how crazy it was going to be, and it’s turned out to be 10 times crazier than we all thought … We just were so focused on training and enjoying each other’s company, switching off and then going again.”

What also helped, Russo says, was the influence of manager Sarina Wiegman, who has yet to lose a game with England, nor at the Women’s Euros having also led Netherlands to victory in 2017.

“I think we all love playing under her,” says Russo. “She has like a real calmness about her. She’s very relaxed and off the pitch and even on the sidelines. She doesn’t really get too heated or too in the moment — she’s very level-headed.”

The 23-year-old Russo has largely been used as a substitute throughout her England career and was brought off the bench in all six of the Lionesses’ Euro 2022 games.

Her fourth and final goal of the tournament was the most memorable — a sublime, instinctive back-heel through the legs of Sweden’s goalkeeper Hedvig Lindahl which put the gloss on England’s 4-0 semifinal win.

“I don’t think I’ll ever score a goal like that again,” says Russo. “I think it was just a one-time wonder, but I’ll take.”

The goal quickly earned plaudits from across the women’s game and beyond, including catching the attention of US great Abby Wambach and Chelsea and Australia star Sam Kerr.

“I saw my old club that I grew up playing with — they were all practicing at training, which was nice,” Russo adds.

“And if it’s a goal or whatever, it’s nice to see that women’s football’s leaving a mark on the world and on young boys and girls. If it’s inspired one person to go out and play football, I’ll take it.”

Watch the goal back — and the wild celebrations that followed — and it’s hard not to be inspired by Russo and the Lionesses.

The future of women’s football in England looks bright, but before Russo can begin to contemplate what it might hold, she has more immediate priorities.

“There’s definitely a holiday coming up,” she says. “It’s been an amazing few months, but I’m very exhausted and need a little break.”