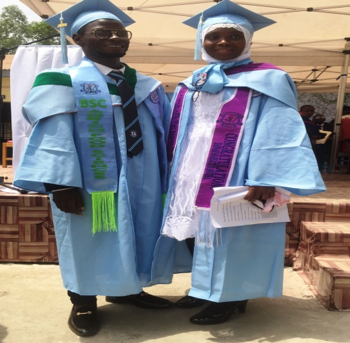 SIERRA LEONE, Makeni – Six hundred and fifty-four (654) males and females who have successfully completed their courses at the university, were on Saturday 19th March awarded their degrees certificates and diplomas.

Abdul Bangura and Mariatu Zainab Bangura from the Agriculture and Public Administration and Management departments were announced as the best male and female graduates for the year after respectively scoring cumulative grade points of 4.69 and 4.65 the highest and second highest overall scores for this academic year.

Both Abdul and Mariatu told Awoko Newspaper that they are happy to have emerged as the University’s best students of the year, adding that winning the Adonis Aboud Awards is their biggest academic achievements so far.

“We have been able to achieve this feat as a result of our hard work and the seriousness we applied during the course of our studies and our motivation to our peers is to let them embrace whatever they are doing because it will pay off in the end.” ARW/21/3/2022